Tapper Grills Israeli Spox: When Do You Say ‘Enough, We’re Killing Too Many Innocent Children?’ 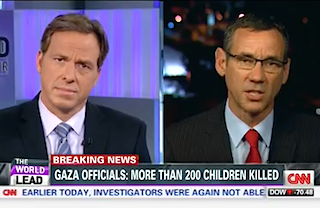 CNN’s Jake Tapper opened Tuesday’s edition of The Lead with an often tense conversation with Mark Regev, a spokesperson for Israeli Prime Minister Benjamin Netanyahu who was speaking to the network via satellite from Jerusalem. With Gaza officials reporting 200 dead children as a result of missile attacks from Israel, Tapper asked Regev when the Israeli government will say “enough” is enough.

Tapper began by asking Regev about the “unilateral ceasefire” that President Barack Obama reportedly called on Netanyahu to put in place. When the spokesperson said he could not confirm those reports, Tapper continued to press the issue before eventually saying, “You’re not answering the question. But I’ll accept that you’re not going to answer it.”

He then pivoted to “these heartbreaking scenes” coming out of Gaza. By Tapper’s estimates, he said Israel has killed more Palestinian children over the last three weeks than Israeli soldiers have been killed in all its conflicts since 2006. “That is a lot of dead children especially relative to the number of soldiers that have been killed in Israel, in Israeli military operations in the last eight years,” he said. “At what point does the Israeli government say, ‘enough, we’re killing too many innocent children?'”

“We don’t want to see innocent civilians caught up in the crossfire between us and Hamas,” Regev said in response, to which Tapper replied, “It’s not just the crossfire though.”

“It is,” Regev said, pointing to Israel’s acceptance of an Egyptian-coordinated ceasefire two weeks ago as evidence that they were serious about ending the violence. But, as Tapper pointed out in response, Netanyahu rejected a more recent ceasefire proposal from Secretary of State John Kerry.

After more similar back and forth, Tapper asked, “I think the question is, is what Israel’s doing, A, is it commensurate with the attacks coming at Israel, and B, is it actually going to be good for Israel in the long run?”

In the end, Regev turned the question around on the United States, saying that if Israel were to “give the terrorists immunity” when they shoot rockets over the border, “they’ve found the winning way to win the war against the democracies.” He asked, “Is that good for America? Is that good for Canada? Is that good for any democracy if terrorists finally found that winning combination?”