Tapper Grills Medical Guest: How Can You Say Dallas Hospital Did ‘Terrific Job’? 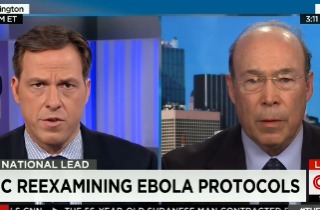 CNN’s Jake Tapper spoke with Dr. Robert Haley, former president of the Dallas County Medical Society, to talk about the Dallas hospital that was treating Ebola patient Thomas Duncan before he died and now one of their nurses is being treated for Ebola. Haley said the hospital “did a terrific job of caring for Mr. Duncan and protecting their employees,” a sentence that really caught Tapper’s attention.

Haley defended the hospital, said they were “very well-prepared,” and the problems with Duncan’s treatment stemmed from protocol issues that and “the fact that we have some things to learn about isolation and protection of employees.”

Tapper asked, somewhat bewilderedly, how he could express such positive sentiments:

“Obviously they didn’t do a great job at the hospital because one of their nurses has Ebola and it’s possible that she may have infected somebody else, so what you said just isn’t true. They didn’t do a great job. A great job is when you treat an Ebola patient and he survives––not you turn him away from the hospital and he actually gets worse and then he comes back and then you treat him and then he does––and no one else on staff gets Ebola.”

Haley pointed out that Ebola morality is not 100 percent, so Duncan dying is not necessarily a “failure.” He did acknowledge, though, that there are certain steps he knows to take now that he wouldn’t have known about last week.