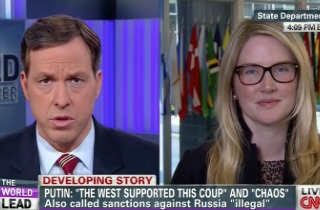 State Department Spokeswoman Marie Harf joined CNN host Jake Tapper on Friday where she was probed over why the administration has not followed up on it’s threat to impose greater sanctions on Russia even though violence in Ukraine persists. Harf told Tapper that the administration was “playing the long game” in their effort to deter Russian aggression in Ukraine.

Asked if Russians were “meddling” in Ukraine’s May 25 presidential election, Harf replied that they “absolutely” were.

“There are a few isolated place, Jake, where pro-Russian separatists are trying to disrupt these elections,” Harf said. “We have called on President [Vladimir] Putin to use his influence to tell them not to.”

She said that “sectoral sanctions” are on the table if Putin ignores warnings from Washington. “So he really has a choice to make,” Harf added.

“I think he’s already made the choice, Maria, that’s the point,” Tapper replied. “Where are the tougher sanctions?”

Harf replied that those stronger financial restrictions are “ready to go.” However, she said that the administration is waiting to see if the election is interfered with before imposing them.

“I don’t understand why you said if we see the meddling continuing there will be costs,” Tapper countered. “It sounds to me like Putin and Russia have already crossed the red line that President [Barack] Obama set earlier this month.”

Harf stressed that Russia can still de-escalate the crisis in Ukraine. “Look, we’re playing a long game here,” she insisted.