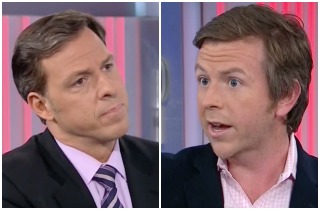 In a segment on Monday delving into the appropriateness of comments made by Fox News contributor and GOP strategist Karl Rove about the age and health of former Secretary of State Hillary Clinton, CNN host Jake Tapper and reporter Peter Hamby argued over how safe it was for Republicans to be raising that issue. Hamby argued that the GOP must bring up Clinton’s health issues “carefully” because the Clinton campaign could claim they are a victim of gender or age-based discrimination.

“I think Karl Rove –- I talked to some Republicans — they probably agree that he overstepped,” Hamby said. “The issue of the candidate’s health and age is absolutely fair game. It has to be approached with carefully. I think political people think this because she’s a woman. That’s tough.”

“Because, they can easily, I think, turn it around,” Hamby replied. “Don’t you think that people can easily turn around questions and say they they’re under attack.”

“Oh, sure,” the host responded. “But the question is: Would a man face the same questions?”

“That gets to my point,” Hamby said. “This took what is a legitimate issue and pushes it into conspiracy territory.”

Hamby asserted that former President Bill Clinton used the attack on his wife to their advantage and “belittled” Rove in his response. “The Clintons are good when they’re under attack,” he observed.