Tapper To Gibbs: Flight 253 Suspect Was On A Watch List, Who Was Watching?
video

Tapper To Gibbs: Flight 253 Suspect Was On A Watch List, Who Was Watching? 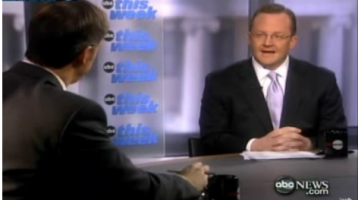 Hot on the heels of Janet Napolitano‘s “The system worked like clockwork” appearance on This Week, White House Press Secretary Robert Gibbs faced questions from Jake Tapper, who cut through the word blizzard and got to the heart of the issue. If the flight 253 suspect was on a watch list, who was watching him? Gibbs’ response was equally on target.

Gibbs began by explaining the differences between the various lists, from the large 550,000 name database, to the 14,000 on the “selectee list (people who get pulled out of line for additional searches), and the 4,000 person “no fly list.” He pointed out that “these procedures are several years old,” which may be seen by some as pointing a finger at the Bush administration, but which I would peg as an attempt to frame this in nonpartisan terms. Gibbs has never been shy about name-checking the previous administration, but he didn’t do that here.

Here’s where Jake Tapper’s experience with the White House really comes in handy, as he frames his question to Gibbs through the lens of their shared knowledge of the President:

TAPPER: Let me ask you a question. Knowing the president — I’ve been covering him for a few years — I can’t imagine that he would hear this guy’s father reported to the U.S. embassy that he has extremist religious views, and within a matter of weeks, he boards an airplane with explosives on his person and is not subject to additional security. I can’t believe that he would not hear that information and say, “that’s nuts.” Why did that happen?

GIBBS: Jake, he’s heard that information and heard it not long after it was brought to the situation room. That’s what has precipitated both a watch listing review and a detection capabilities review, to ensure that one, the information that we have goes through the process the right way and surfaces to those that have to make those decisions. Again, we have a watch list that this individual was on, that contains about 50 — 550,000 names. So this individual was listed in November of 2009 on that database based on that information. The no-fly list and the selectee list…

GIBBS: Well, again, Jake, I think if you read the papers this morning, you’ll find that the name was listed, concern was brought, but the ability…

TAPPER: Brought to who? Anybody can just write down a name. I mean…

GIBBS: No, no, this is a database that a series of agencies enter names into, and a series of agencies draw information from. But again, Jake, the investigation will look backwards and figure out if any signs were missed, if any procedures can be changed about how names are watch-listed. But again, understand there are 18,000 people on either a selectee or a no-fly list. This is a database that contains — I’m sorry, 550,000 of those names. It’s a huge number. We have to ensure and the president has asked that a review be undertaken swiftly to ensure that any information that’s gathered and put into any database, that it gets to where it needs to go, to the people that are making decisions.
But again, Jake, understanding, 550,000 are on that one database. The president wants to review some of these older procedures and see if, quite frankly, they are outdated…

TAPPER: They need to be updated.

Gibbs takes the long way around to saying that the listing procedure needs to be fixed, a message that is almost certainly more comforting to people than the idea that this near-disaster is an example of a “smoothly operating” and “clockwork” system.

Above all else, it’s important for incidents like this not to become political. Conservatives have tried to attack the President for not addressing the nation about this, even though, as Tapper points out, President Bush didn’t feel the need to do so after the Richard Reid “Shoe Bomber” incident.

Gibbs (and Tapper) are right that the list procedures need to be reviewed. It doesn’t seem like it would be that hard to check that 550,000-name list, as anyone who ever had a late fee at Blockbuster can attest. Would it really take that much more time to frisk these people? Maybe if they all flew on the same day.

On the other hand, would such a move tip off someone new on the radar, causing him to take extra-stealthy measure? Probably. That’s the real problem here. No matter what we do, we will always be playing catch-up with terrorists. Their objective is too simple. The sad fact is, we are never going to be completely safe. Even if we ignored “political correctness,” as the right puts it, and started profiling our little hearts out, do you think there is no way to defeat that? A guy can’t put on a Yankees hat and change his name to “George,” or “Mark?”

The important thing is to remain calm, do everything that is reasonably possible to do, and wait until you know all of the facts. Don’t freak out, but also don’t pretend everything’s peachy.