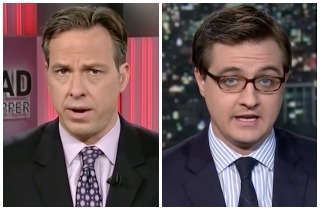 Of all the changes CNN has made since the Jeff Zucker era began in 2013, few would argue the hiring of Jake Tapper away from ABC has been the most deserving of applause.

In a world where partisans and the perpetually outraged seemingly are taking over, Tapper is one of the last true objective voices in cable news. Fox’s Megyn Kelly is another who gives as tough an interview you’ll see regardless of the subject’s party affiliation (and if you think otherwise, we’ll see you in the friendly comments section!). And MSNBC’s Steve Kornacki also calls a fair game and really should have a bigger platform on the network. There are others, of course… perhaps that’s a column for another time.

When it comes to Tapper, it really is impossible to call him left-leaning or right-leaning. He’s cynical, skeptical and curious on a story-by-story basis instead of looking at issues through the prism of red or blue. If Zucker is wise, he’ll move him to primetime in 2016 as the focus on the election dwarfs everything else outside of big breaking news. Perhaps that’s also a column for another time.

As reported here yesterday, the 46-year-old host of CNN’s The Lead and Sunday’s State of the Union had a run-in with one of the bigger trolls on Twitter in the form of Oliver Willis. Willis isn’t a reporter, he just plays one on the Internet for David Brock‘s Media Matters… which really isn’t a publication… just an innocent non-profit free of any tax burden with no political activism attached or anything. Anywho, the whole brouhaha began when someone named Judd Legum (Think Progress), decided to attack Tapper about the lack of diversity on the Sunday political talk shows:

@JuddLegum we had two presidential candidates on. The woman running for the Democratic nomination hasn't sat down to do one Sunday show yet.

@jaketapper This is a systemic issue that occurs week to week. It's not just ABC. And it's not just during presidential runs. Look at the #s

@owillis @JuddLegum I can't help it if the entire Democratic field is white. Do I get points for interviewing Cruz, Carson and Rubio?

@owillis @JuddLegum is that your go to word when somebody says something you don't have an answer for?

Obviously, the point around Cruz, Rubio, and Carson was the checkmate portion of the exchange to anyone who isn’t blindly partisan (See: Willis). Of course, he doesn’t really accept Cruz, Rubio or Carson as minorities because of the “R” next to their names. No matter… Tapper won the fight with a 3rd Round TKO (Twitter Knockout)… a rarity when only having 140 characters or less to punch with.

The whole thing is reminiscent of a quota policy Chris Hayes once shared upon getting the 8:00 PM timeslot on MSNBC back in 2013, a topic I tackled then. Here’s what Hayes told the Columbia Journalism Review:

“We just would look at the board and say, ‘We already have too many white men. We can’t have more.’ Really, that was it,” Hayes says. “Always, constantly just counting. Monitoring the diversity of the guests along gender lines, and along race and ethnicity lines…A general rule is if there are four people sitting at table, only two of them can be white men. Often it would be less than that.”

Yup… that’s really the way some minds think, and given the critical acclaim and ratings juggernaut Hayes’ All In has become, it’s hard to argue with that strategy (/sarcasm). Of course, Chris doesn’t seem to mind that MSNBC’s 7:00-11:00 PM prime-time programming consists of the three white men and one white woman. Included in the lineup are Chris Matthews (68-years-old) and Lawrence O’Donnell (63). The only other important show on any cable network (from an ad revenue/ratings perspective) exists on weekday mornings. At last check, MSNBC’s Morning Joe primary cast of Mika Brzezinski, Joe Scarborough and Willie Geist are quite a shade of pasty.

In the end as any decent producer will tell you, truly compelling guests are hard to find. It doesn’t matter what color or gender they are… you either nail it or you don’t. A quality guest can almost always make or break a segment, even an entire program. It could be the most intellectual, thought-provoking, progressive-pleasing, unique topic on cable that night. But if you don’t have the right players on the field to execute, it will fall flat. And if you think audiences are really tuning in because of what somebody looks like and not because of what they’re saying, as I wrote at the time, we’re going completely backwards as a society.

CNN made the right move in hiring Tapper.

Those keeping a gender and race scorecard at home be damned…

And he’s not only getting the job done on the big screen, but even in the swamp known as Twitter.

>>Follow Joe Concha in the swamps of Jersey @JoeConchaTV