Tavis Smiley Laments Gap Between ‘Rich and Rest of Us,’ But Who’s ‘Us’?
video

Tavis Smiley Laments Gap Between ‘Rich and Rest of Us,’ But Who’s ‘Us’? 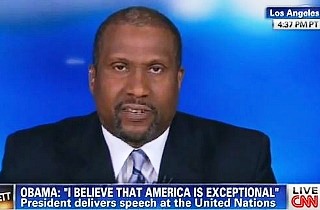 On Tuesday night, CNN’s Erin Burnett asked liberal radio and PBS host Tavis Smiley whether he believed President Barack Obama was correct to tell United Nations General Assembly that he believed the United States was an exceptional nation. Smiley did not. He said that the nation threatens to “implode” unless the wealth gap “between the rich and the rest of us” is erased.

“It is hard to make the argument that we are exceptional when poverty is out of control,” Smiley began. “We can’t house our people. We have education crisis. We have environmental degradation and government is on the verge of, perhaps, shutting down.”

“We want to continue with this notion that we are exceptional? I don’t know how rubbing our noses in the face of the rest of the world — telling them how bad we are — I don’t know how that advances our cause,” Smiley said.

Here, he commits the fallacy of mistaking “exceptional” for “supreme,” but it’s a mistake that many on the left make when the recoil at the articulation of the idea that America is an exceptional nation.

American exceptionalism is commonly understood as the recognition that the United States was a nation forged as the result of unprecedented circumstances and based around a common appreciation of ideal rather than tribal affiliations. Often, progressives believe a belief in American exceptionalism is an implicit attack on the legitimacy or remarkability of other nations. It is not.

Burnett then played a clip of Obama denying the notion that America was especially exceptional, saying that the citizens of every nation believe their country is exceptional. “Do you think that this is him, sort of, saying, ‘Look, I have some popularity issues. I need some backing and I need to play more to the other side of the aisle?” Burnet asked.

“It is a, sort of, cheap populism,” Smiley replied. “There is a distinct difference between patriotism and nationalism.”

He denigrated “flag-waiving” as a way in which the citizenry can avoid confronting the real problems they confront. In Smiley’s estimation, the real threat to the American republic is poverty.

“We have to focus on the real issues, which is that in this country,” Smiley said. “The gap between the have-gots and the have-nots continues to widen, and we have to do something between rich and the rest of us.”

“Us?” Certainly, “us” does not include Mr. Smiley. According to two websites which estimate celebrity net worth, the popular television and radio host is worth upwards of $10,000,000.

Smiley continued to make odd assertions, suggesting that the poverty gap in the nation would “implode” the American republic. This is a truly vexing assertion to make considering the gap between rich and poor in American history has been far greater in the past. New York City’s poor took to the streets and lynched wealthy and minority residents in response to the Civil War-era drafts in 1863. During the Great Depression, riot and unrest was a regular feature of American life. And yet the American experiment continues. And yet, the republic survives.

While poverty is reaching levels unseen in decades, and it is the lack of opportunities available to America’s poor is something that all politicians should – and do – frequently address, to suggest that the republic will collapse as a result of this condition is an unfounded assertion to make.

Every nation struggles with poverty – many more so than does the United States. One must assume that Smiley does not believe the entire globe is on the verge of some implosion or that these other nation’s exceptionalism is threatened by their needy.

One can almost hear an aspirational tone in Smiley’s declaration that the United States is doomed unless the wealth gap retracts. Why he would hope for such a disastrous condition though is a mystery.