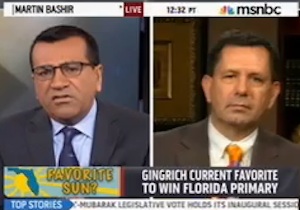 Tea Party Nation founder Judson Phillips got into a spirited donnybrook with MSNBC host Martin Bashir over Newt Gingrich’s comments about President Obama being the “food stamp president.” Judson told Bashir that Gingrich is succeeding with throwing red meat to the party base.

“Do you include those barely concealed, racially-charged divisive comments about the president being a food stamp’s president?” Bashir fumed. “There’s nothing racial about that, he is a food stamp president,” Judson shot back. “He’s gotten more people on food stamps!”

RELATED: Gingrich Would Tell The NAACP To ‘Demand Paychecks And Not Be Satisfied With Food Stamps’

“I will check the information,” Judson replied.

“Don’t use that as an assertion!” Bashir snapped.

“Regardless. Newt Gingrich wants to get people off of food stamps,” Judson concluded. “That’s the anti-racist position. If you want somebody on food stamps, you ought to have your head examined!”

PolitiFact examined Newt Gingrich’s assertion that “more people have been put on food stamps by Barack Obama than any president in American history” and found his statement to be “half-true” — explaining that while Supplemental Nutrition Assistance Program (SNAP) beneficiaries were at a record level, placing sole blame on President Obama was an oversimplification.

Based on PolitiFact’s statistics, it would appear Bashir would be wrong to claim President Bush had “more people” on food stamps. Though, on the other hand, it should be noted that FactCheck.org supports Bashir’s assertion.

UPDATE: Martin Bashir responded to being called wrong by linking to FactCheck.org’s article:

PolitiFact’s Louis Jacobson stands by his original finding that Gingrich was right to assert that “more people have been put on food stamps by Barack Obama than any president in American history.”

“On this one, we disagree with our colleagues at FactCheck.org (a relatively unusual occurrence, but the kind of thing that happens periodically when you have two different outfits analyzing complicated and nuanced charges),” Jacobson explains.

“My understanding is that they interpreted the statement by Gingrich — “more people have been put on food stamps by Barack Obama than any president in American history” — to mean total, raw numbers of people during one president’s tenure. By contrast, we interpreted it to mean that under Obama, food stamp usage per month has reached all time highs. Both approaches have merit, and neither is entirely perfect, but of the two choices, we prefer ours.

If you use raw numbers for a president’s entire career, as FactCheck did, you run into a problem — Bush accumulated his food stamp users over eight years, compared to three for Obama. Bush had lower numbers overall, but had two to three times the amount of time to add more people to the rolls. That strikes us as a bit of apples and oranges. By using snapshot totals by month, as we did, you avoid the apples-oranges problem.”