Tea Party Express Chair: I Don’t Believe Obama Loves The Country The Way We Do
Video

Tea Party Express Chair: I Don’t Believe Obama Loves The Country The Way We Do 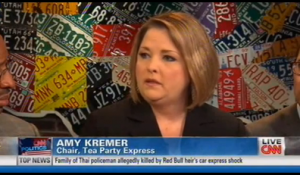 On Tuesday morning’s Starting Point, host Soledad O’Brien asked Tea Party Express chair Amy Kremer was asked whether she thought President Barack Obama loved the United States. Kremer replied that, as she sees it, Obama is more focused on making the country part of something “global,” and less about pursuing the idea of “the shining city on the hill, the greatness that has always been America.” And the case for Mitt Romney, she continued, is that he has “taken companies that are failing and turned them around to make them successful.”

O’Brien’s question was prompted by a Tweet Kremer had posted earlier:

Huge difference between @mittromney & @barackobama is tht Mitt luvs America! We need a president that luvs this country! #RNC2012 #GOP2012

Fellow panelist Mayor Michael Nutter then noted that Romney “has also taken over companies and put people out of work. at the expense of losing jobs and making money for himself and for his investors. If you’re going to tell one side of the story, tell the other side.”

“I just never understand what any of that has to do with loving the nation,” said O’Brien. “Honestly, I always feel like that’s a code word for something else.”

“what is the basis for questioning the President’s love for this country? How can you say that?” said Nutter

“I just don’t believe that he loves America the way that we do,” Kremer replied.

“He is more about one world,” Kremer repeated, adding that she didn’t know how to further explain it.

“I mean, we are not leading,” she said. “We’re waiting on others to tell us what to do. That’s never been the American way.” When asked what she meant, specifically, Kremer cited the U.S.’ role in Syria, where “the French told us we could go and do what we needed to do.”

O’Brien brought the conversation back to the issue of coded language, having to explain to Kremer what is meant by the phrase “dog whistle.”

“If you love this country and you want to restore our heritage and that sort of thing, you go out there and you lead,” said Kremer. “You don’t wait on others to tell you what to do. And you take those bold steps. I mean, I don’t think that that’s what the objective of this administration is.”

Have a look at the discussion, via CNN: