Tea Party Leader To Laura Ingraham: ‘We’re The Adults In The Room’ In Debt Debate 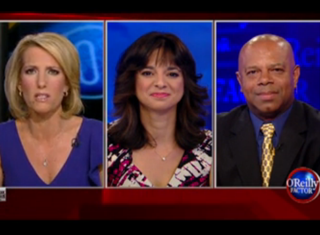 The Tea Party, the fiscally conservative movement that turned the House of Representatives over to the Republicans last November, has found itself in the eye of the debt crisis storm this week as Tea Party-backed legislators almost sank the House Speaker’s own bill. On last night’s O’Reilly Factor, Tea Party leader David Webb told host Laura Ingraham he was outraged his group was being labeled childish, as, in the debate, “we’re the adults in the room” who Americans listen to.

Ingraham moderated the debate between Webb and commentator Cathy Areu, who had nothing positive to say about the movement. “Some of the people in the Republican Party are acting like children,” she chided, though Ingraham countered that “there is no doubt that the Tea Party is responsible for the current debate.” Ingraham also took issue with several comparisons of the Tea Party in the media to various radical groups, suicide bombers, and Hezbollah. Webb wasn’t surprised. “According to the left, I have Stockholm Syndrome, I’m the house n-word, I’m the Uncle Tom,” he argued, “I mean, it’s nothing new.”

Ingraham lamented the tone, especially since, “after Gabby Giffords and after this Tuscon shooting, I thought there was a new era of civility.” She also didn’t understand why the left would be upset with the Tea Party: “I’d be kind of really upset with Geithner, Obama, Biden and the whole crew who seem to have basically shuffled off the responsibility to come up with any type of plan.” Areu disagreed vehemently, claiming the Tea Party “made a fool out of themselves” and “don’t even know what they stand for.” Here Webb once again countered that it was the Democrats who were acting childish, and Tea Partiers who were in charge.