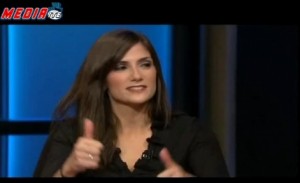 Real Time host Bill Maher, who normally says “teabagger” more frequently than a foreman on a Lipton assembly line, was on his best behavior last night for “Tea Party Person” (and Hottest Conservative New Media Woman) Dana Loesch. Both he and DailyKos founder Markos Moulitsas, another aficionado of the term, studiously avoided using the Tea Party-coined-then-rejected appellation throughout most of the show, obviously in deference to Loesch.

Maher did slip up near the end, though, and Tea Partier Loesch let him have it with both bags.

When Maher first introduced Big Journalism’s Dana Loesch as a “Tea Party Person,” the stage was set for some kind of showdown. Both Maher and panelist Markos Moulitsas are full-throated users of the term “teabagger,” so even if both of them managed to control the urge to whip out the mocking term, it seemed likely that Loesch might confront them about it anyway. As it turns out, Maher “let one go” toward the end of the show, and Loesch pounced:

All things considered, it was a winning moment for Loesch, who was a good sport about it while nearly scoring a bizarre sexploit with Maher. Although she was probably being tongue-in-cheek, Loesch’s rejoinder underscores the sexually aggressive original meaning of the term.

Tea Partiers not only invented the term, they did so in order to inflict the same double entendre onto the President, the Democrats, and liberals in general, to which they now object. They have tried to re-cast the term as a slur, on a par with the “n-word,” hurtful to all the Tea Party members who are just ordinary moms, dads, sons, and daughters. The latter point has some resonance, but the former is ridiculous in the extreme.

In emails, protest signs, t-shirts, and online, early Tea Party literature urged protesters to “Tea Bag the White House,” and to “Tea-bag the liberal Dems before they tea-bag you.” The suggestion is that the metaphoric “tea-bags” be shoved in the mouths of the President, Democratic members of Congress, and even ordinary citizens who identify as liberal Democrats. The idea that they just didn’t know the term’s only (at that time) meaning is belied by the fact that they obviously knew it was negative (and non-consensual), since they didn’t want it done to them, and also because it only had one meaning.

It was only after MSNBC’s Rachel Maddow and David Shuster, and CNN’s Anderson Cooper, turned the tables on the term that Tea Partiers objected. They were perfectly satisfied to advocate the metaphoric mouth-rape of liberal men, women, and children, but became indignant when the insult boomeranged on them.

Along with the fact that it was born out of Rick Santelli’s homeowner-scapegoating rant on the floor of the stock exchange, this was one of the reasons I originally found the movement so offensive, and why I beat Maddow and Shuster to the punch in using the term against them. Just as today’s Tea Partiers include ordinary Americans who didn’t ask for this treatment, the original targets of the term included liberal fathers, mothers, sons, and daughters, including most of my own family.

It is for this reason that I think the term has long since outlived its usefulness. First of all, it stopped being clever about 3 minutes into Shuster’s rant, and morphed into a juvenile schoolyard taunt. “Tea-baggers” then became the media’s favored shorthand for the movement for a time, but now that the objection has been widely registered, that’s no longer the case. The early Tea Party adopters of the term are now a minuscule minority, so it now serves only to insult people who had nothing to do with the original offense, and to buttress the group’s persecution complex. It’s also bad politics. Contemptuously dismissing the Tea Partiers has only allowed them to grow, and to prevent Democrats from effectively countering them.

As for President Obama’s use of the term, I can only guess, but based on the fact that, 2 years in a row, the White House declined to reach out to the group, it doesn’t appear that he’s all that concerned about their feelings.

For most in the media, the message seems to have sunk in, as you rarely hear the term used on TV, outside of Maher’s show, anymore. While it’s easy to mock a group in the abstract, Maher and Moulitsas have shown that sitting face-to-face with another human being is a completely different story.