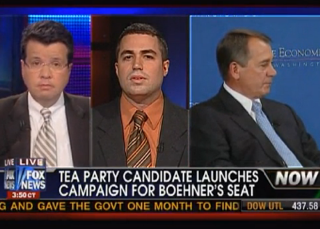 Who is David Lewis and what is he doing giving House Speaker John Boehner a primary challenge? While his origins are somewhat unclear, the Tea Party activist’s agenda was on full display today on Your World, where Lewis told host Neil Cavuto he considered Rep. Boehner a “socialist,” that the Tea Party movement was still “figuring out” whether it was socialist itself, and that Planned Parenthood is a “criminal syndicate.”

Cavuto introduced the candidate asking about his general platform, which mostly seems to consist of opposition to Planned Parenthood and, by proxy, Speaker Boehner for having voted to fund it. “It is an organization that murders babies,” he told Cavuto dramatically, which led Cavuto to attempt to change the subject to any other platform issues. That resulted in Lewis noting, “I am the Tea Party candidate… John Boehner is a socialist.” Cavuto, flabbergasted, attempted to dispute that, with Lewis clarifying, “I’m not calling names– it’s an economic policy.” He didn’t particularly elaborate how this economic policy was visible in Speaker Boehner’s views other than saying “here’s someone that refuses to phase out Social Security.”

The bizarre comments led Cavuto to question whether Lewis was an actual Tea Party-backed candidate (as the Tea Party has no central leadership, it is entirely possible to claim to be a member of the Tea Party without having the support of any one individual or group). “I think so,” Lewis replied, arguing that “the Tea Party is still trying to figure out whether they believe in socialist policies.” That last bit will probably come as a surprise to anyone else who associates themselves with the Tea Party, as their views on socialism are the only unifying tenet of the movement.

In any case, the interview continued awkwardly in this vein, with Cavuto trying to get answers out of Lewis that made for some coherent views and instead getting comments like “Planned Parenthood is a criminal syndicate.” One can’t help but notice a bit of regret, or at least confusion, on Cavuto’s end at Lewis being given a national platform.