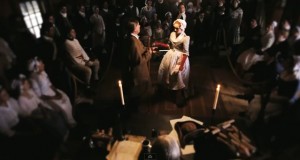 The Tea Party movement has been, practically since its inception, a multi-platform venture. Recently, for instance, the movement created its own magazine, the Tea Party Review, which promises to reflect “the diversity of the movement.” Now, the Tea Party has added a production company to its many offerings. Colony Bay’s first project is a historical drama, Courage, New Hampshire, which will premier this Sunday at a movie theater in Monrovia, California with the help of red carpet hosts Victoria Jackson, the former SNL cast member who recently embarked on a one-woman mission to alert the world to the horror that is Glee, and All Patriots Media Network radio host Tony Katz. The program will be available on DVD at a later date.

According to The Hollywood Reporter, the show does not yet have a distributor, but is trying to negotiate with outlets like Glenn Beck’s GBTV and Kelsey Grammer’s Right Network.

Colony Bay was founded by Hollywood veterans James Patrick Riley and Jonathan Wilson, who issued a strict “no politics” policy at the workplace and are hoping that the film, set in colonial America, will attract viewers across the political spectrum – although reaching a wide demographic might prove difficult if they eventually seal a distribution deal with a solely right-leaning network. Riley and Wilson also say that they don’t discriminate when it comes to hiring actors and crew for Courage, noting that they even have some “raging leftists” among their fold.

Below, have a look at Courage, New Hampshire‘s first episode, “The Travail of Sarah Pine:”