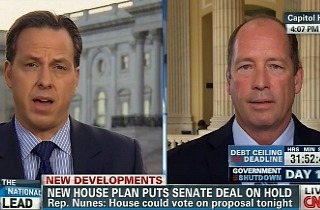 A promising plan floated by the House GOP which would have reopened the government, raised the debt ceiling, and provided the Republicans with a set of valuable talking points regarding how they had sought and obtained reforms to the Affordable Care Act appears to be collapsing.

The two-year delay of the tax on the revenues, not profits, of medical device manufacturers has been dropped from the primordial plan. According to reports, this was eliminated at the request of conservative members in the House. Presumably, they are following the advice of conservative policy advocates like the Heritage Foundation which indicated that any positive reforms to the ACA will delay the law’s ultimate, natural collapse – an idea panned by conservative opinion leaders like the Wall Street Journal’s Paul Gigot.

Now, apparently, a provision playfully referred to by reporters as “Vitter-lite” is also being dropped in favor of the full Vitter Amendment. This amendment would exempt members of Congress, the president, the vice president, and Barack Obama’s cabinet from employer subsidies when obtaining health insurance through the ACA’s insurance exchanges. This morning, congressional and White House staffers were exempt. As of this afternoon, they are no longer exempt.

“It’s a cleaner message: fairness,” members of the Republican Study Committee told CNN’s Dana Bash. You can almost hear her sense of incredulity.

If the Republicans in Congress are hoping to be able to convey the message that everyone in Congress, including staffers, should be exempt from employer subsidies for the sake of “fairness,” they better have a strategy to do this in the face of stiff opposition from the press.

Take CNN host Jake Tapper, a solid reporter who can be depended upon to examine the angels to stories often ignored by the majority of the mainstream press. His instincts in an interview with Rep. Ted Yoho (R-FL) on Tuesday are telling.

“Just to drive down a little deeper on the thing about staffers, I think the idea is Senator [Chuck] Grassley (R-IA) here in the Senate pushed forward the idea that everybody who is responsible for this bill would have to also enter the Obamacare exchanges, but there was concern since a lot of people on Capitol Hill don’t make that much money — they make $20,000, $30,000, $40,000 a year — that the money already being spent on their health care, would there be a way to use that money so that they can buy the health care?” Tapper asked Yoho.

“And if you don’t do that, essentially you’re taking all these staffers who don’t make a lot of money –certainly don’t make what you’re being paid as a congressman, sir — and giving them a huge pay cut,” he continued. “What’s your response to that?

“Well, that’s going to happen to the American people, too, because they’re going to have to abide by the rules of this, and there’s a lot of people out there hurting,” Yoho replied.

Yoho’s response is, quite simply, insufficient.

Washington D.C. is a one-company town. Beltway reporters are not disinterested observers. Hill staffers are friends, relatives, spouses, colleagues to Beltway journalists. Reporters, being human beings, are unlikely to take kindly to an amendment which robs their friends and acquaintances of what was once a living wage in the name of “fairness.”

But their objections will not merely be personal. Critics of the Vitter Amendment are correct that reducing incentives to work on the Hill will result in a brain drain of sorts. The best and the brightest looking to work in public service will opt out of politics in favor of more lucrative ventures. Believe it or not, much like any other industry, Congress needs talent in order to function.

“Vitter-lite,” while suboptimal, would have been a tough measure for Democrats to oppose in votes. For an institution as reviled as Congress, the jealous protection their health care subsidies would be a difficult thing to sell to the electorate.

But if the Republicans in Congress think that they can communicate a message of “fairness” by virtue of imposing pain on Washington D.C. staffers, they better hope that they can relate that message to American voters without the help of the media. Recent history suggests that this is a tall order.