Tea Party’s Dick Armey: Romney May Not Be Perfect, But Obama Is Our Lifetime’s ‘Biggest Threat To Liberty’
Video

Tea Party’s Dick Armey: Romney May Not Be Perfect, But Obama Is Our Lifetime’s ‘Biggest Threat To Liberty’ 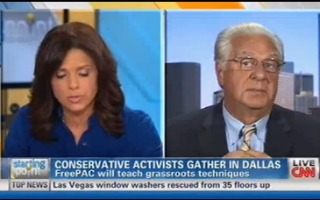 “Last summer,” O’Brien pointed out, “you sounded incredibly underwhelmed by a Mitt Romney candidacy, and you said that the Tea Party will not come out for Mitt Romney. Has that changed?”

“I never said that they would never come out for Mitt Romney,” Armey replied, explaining that the Tea Party is a massive grassroots movement that has been disappointed by Democrats and Republicans alike. “We have been about the business of recruiting what we call ‘legislative entrepreneurs’ in the guise of liberty and small government. And we are going to be getting them elected. But we are all aware that the greatest threat to constitutionally limited small government and personal liberty that we see active in politics in America today is President Obama. I mean, this guy is — in fact, we see him clearly. He’s obsessed with controlling the distribution of income, the distribution of product, the behavior of people, the allocation of capital resources to goofy social causes that are inspired by bad science and bad finance.”

“I’m just going to go on a limb and say Tea Party people are not going to vote for Obama, which is why I asked you a question about Mitt Romney,” said O’Brien. “You were incredibly unenthusiastic about his candidacy only over the summer, not very long ago. So what’s changed? And is, in fact, the Tea Party going to embrace Romney?”

“He is the Republican nominee,” Armey replied. “He is the one person that we have that is in the position to defeat Obama.”

“Is Romney everything we would hope to have?” he asked. “No. But is President Obama proven to be everything we were afraid he might be? Yes. So, obviously, if you get a 180 degree turn-around and you get a Romney that’s not perfectly in agreement with us as opposed to a President Obama who is openly contemptuous of our values, then clearly we’ve made a big turn-around by working for it.”

Obama, he added, is no less than “the biggest threat to our liberty in the history,in our lifetime.”

“An endorsement,” O’Brien concluded. “Not exactly an enthusiastic one, but an endorsement nonetheless.”