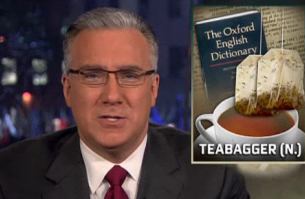 As we noted on Monday, “teabagger” was one of the runners-up for the New Oxford American Dictionary’s Word of the Year. From the start, it threatened to get more buzz than the winner, the trendy/techy neologism “unfriend.” Enter: Keith Olbermann.

Last night, Olbermann devoted a six-minute segment to the word’s nomination, recapping a brief, semifictional history of “teabagger” in which sexually naive tea party protesters foisted the double entendre-prone word upon themselves by “embrac[ing] the tea bag as their symbol,” they celebrated “Teabag Eve” and “Teabag Day,” and the cover of the New Oxford American Dictionary looks like the cover of the totally different Oxford English Dictionary for some reason (see above):

Our number one story on the “Countdown:” the GOP has now, with a little help from us, officially co-opted the word teabagger. It is a runner-up for Oxford’s Word of the Year. Rare that an evolution and a word’s etymology can be observed in real-time with such satisfaction. But it was Republicans who embraced the tea bag as their symbol with Tax Day protests to President Obama’s agenda. And it was Republicans who cluelessly referred to teabagging as if it had no prior meaning.

It was they who openly used the phrase that begged for double entendres. “Countdown” April 14th Teabag Eve. The Republican talking heads like former House Speaker Newt Gingrich had pushed their own vision of teabagging down the throats of the original teabaggers who were in fact Libertarian supporters of Ron Paul. Cincinnati teabaggers down in the mouth about taxes got a Boehner endorsement from the House Minority Leader. And the nation’s teabagging of course impossible without this man, a Dick Armey at the head of it. (transcript via NewsBusters)

Olbermann also took a bit of credit for the coinage of the phrase. He asked Richard Wolffe if there was some process by which he could get recognition from the dictionary committee for introducing “teabagger” to the American lexicon. Wolffe replied that he could write in to the Oxford University Press to claim first usage, but that requesting an entry for World’s Worst Person might be “a preferable way to get into the annals of political science.”