Ted Cruz And Dianne Feinstein Battle In Explosive Debate Over Gun Control In Senate: ‘I Am Not A 6th Grader’ 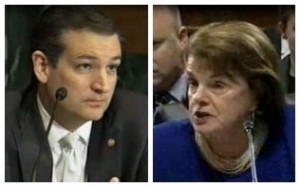 On Thursday, during a committee hearing in the U.S. Senate on gun control legislation, Sen. Ted Cruz (R-TX) and Sen. Dianne Feinstein (D-CA) engaged in a heated exchange over the constitutionality of her support for stricter gun control laws. In posing a question regarding the constitutionality of new gun laws, Cruz lectured Feinstein about the language in the Bill of Rights. Feinstein did not appreciate the lecture and informed Cruz that she was “not a sixth grader.”

“It seems to me that all of us should begin, as our foundational document, with the Constitution” Cruz began. “And the Second Amendment in the Bill of Rights provides that the right of the people to keep and bear arms shall not be infringed.”

Cruz went on to expound on the phrase “the right of the people,” its origins and its prolific use by the Founding Fathers in a number of Constitutional provisions, including the First and Fourth Amendments.

The question that I would pose to the senior senator from California, would she deem it consistent with the Bill of Rights for Congress to engage in the same endeavor that we are contemplating doing with the Second Amendment in the context of the First and Fourth Amendments. Namely, would she consider it constitutional for Congress to specify that the First Amendment shall apply only to the following books, and shall not apply to the books that Congress has deemed outside the protection of the Bill of Rights?

Cruz posed a similar question to Feinstein regarding the Fourth Amendment.

“I’m not a sixth grader,” Feinstein replied. “Senator, I’ve been on this committee for 20 years. I was a mayor for nine years. I walked in and I saw people shot. I’ve looked at bodies that have been shot with these weapons. I’ve seen the bullets that implode. In Sandy Hook, youngsters were dismembered.”

“I’m not a lawyer, but, after 20 years, I’ve been up close and personal to the Constitution,” Feinstein continued. “It’s fine you want to lecture me on the Constitution. I appreciate it. Just know I’ve been here a long time.”

“I respect your views, I ask you to respect my views,” Feinstein concluded.