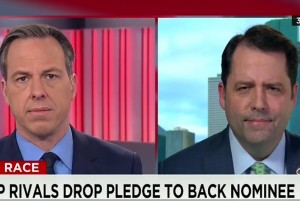 In the controversy surrounding that National Enquirer story alleging that Ted Cruz had extramarital affairs, plot either thickened or thinned Wednesday afternoon, depending on how you read things. While Cruz has thrown everything but the kitchen sink at the story, that kitchen sink has consisted of an outright denial. On CNN’s The Lead Wednesday, host Jake Tapper noted that Cruz, even when pressed by a Daily Mail reporter, has thus far not simply come out and said he has never been unfaithful, and asked Cruz Campaign Chairman Chad Sweet to explain. Tapper put the question to Sweet in fairly airtight fashion, but you be the judge if there’s wiggle room in the response:

Tapper: I want to ask you about this horrific tabloid trash, this “National Enquirer” story which the Trump campaign has been pushing out there. One uncomfortable point that critics point out, critics of Mr. Cruz, is that while Senator Cruz has called the story garbage, he’s never unequivocally denied being unfaithful to his wife, Heidi. He was asked directly by a “Daily Mail” reporter “Have you ever been unfaithful?” and he wouldn’t answer or didn’t answer the question. Obviously this is a disgusting topic and an intrusion on his privacy, but the Trump campaign is making hay out of it. I can say I’ve never been unfaithful to my wife, period. Can Senator Cruz say that too?

Sweet: He can say that. Let me tell you, I’m a personal friend of the senator’s. My wife Julie and I have known Heidi and Ted for years. They’re god parents to my daughters. He’s an incredibly devoted and faithful husband and father. I want to be absolutely crystal clear about this. He made it clear that the accusations are garbage and lies, absolutely false, and he wants me to convey this unequivocally as well, that he has been faithful to his wife. There’s no doubt about that. If there’s any confusion about that, let me settle that right here right now.

Setting aside the obvious question, which is that if Cruz “can say that,” then why hasn’t he, there’s also at least a sliver of daylight between Sweet’s declaration and the question that was put to him, and was put to Cruz by The Daily Mail (emphasis mine):

‘Senator I’m sorry, this is a very serious question about your character,’ the second question came.

‘Will you just – if the answer is, “Yes, I’ve always been faithful to my wife,” can you just say so please?’

His practiced answer stuck to the more limited denial that the National Enquirer story was false, calling it ‘complete garbage.’

‘It is total lies, it was planted by Donald Trump’s henchmen, and I don’t think the people of Wisconsin or the people of America have any interest in tabloid trash.’

The word “always” was conspicuously absent from Sweet’s denial, which already suffers from not having been issued by Cruz himself. The lawyerly refusal to flatly deny this allegation is suspicious to many, and will remain so until Cruz puts it to rest, if he ever does.