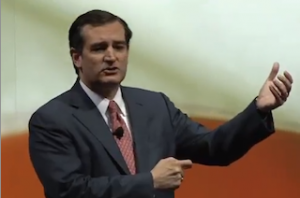 Senator Ted Cruz (R-TX), who recently took credit for blocking the Senate background checks legislation during a speech to the Tea Party group FreedomWorks, delivered another fiery defense of gun rights at the NRA’s annual convention in Houston Friday. Cruz slammed President Obama for disregarding the Constitution and challenged Vice President Joe Biden to a debate over which type of gun a better for self-protection: a semi-automatic assault rifle or a shotgun.

Like Sarah Palin, who accused the president of “exploiting” the Newtown shooting and other gun tragedies at the same event yesterday, Cruz went after Obama for relying to heavily on “emotion.” He said, “We must do everything we can to stop violent crime. And yet, in terms of how you actually stop violent crime, the president is fond of using emotion and unfortunately disregarding the facts.”

Towards the end of his speech, Cruz practically dared Vice President Biden to meet him face-to-face and debate the issue of guns in American. “I would like to invite the vice president to engage in an hour long conversation and debate, ‘How do we stop crime’” Cruz said. “If Vice President Biden really believes that the facts are on his side then I would think he would welcome the opportunity to talk about the sources, the causes of violent crime, who is carrying it out, and how we can do everything humanly possible to stop it.”

Cruz also worked in a dig at Biden for the suggestion he made earlier in the year for Americans to “buy a shotgun” instead of an assault rifle. Cruz said that could be “very useful, if it so happens that you’re being attacked by a flock of geese.”