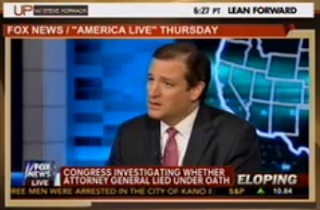 The latest wrinkle in the saga of Fox News reporter James Rosen‘s investigation by the Justice Department is the pea-brained notion that Attorney General Eric Holder perjured himself when he told Congress that he’d never been involved in “potential prosecution of the press for the disclosure of material.”

On Sunday morning’s Up with Steve Kornacki, host Steve Kornacki and HuffPo’s Amanda Terkel entertained that very idea, even after playing a clip of Sen. Ted Cruz (R-TX) which definitively debunks it.

Kornacki introduced the segment by summarizing the current scandals, which involve what appears to be a truly abusive investigation into The Associated Press, and a legitimate, narrow investigation of a leak that was coaxed out of a State Department contractor by Fox reporter James Rosen. He also talked about AG Holder’s ill-received attempts to put out the fire via off-the-record meetings with the few reporters who would agree to attend.

Then, he got to the perjury allegation. “Some are suggesting Holder may have perjured himself when he testified he had not been involved in any prosecution of journalists for disclosing government information,” Kornacki said. “The Department of Justice responded on Thursday, saying that Holder’s testimony was, quote, accurate and consistent with the facts.”

He then played a clip of Sen. Ted Cruz on Fox News, condemning Holder. “The degree of willingness of this administration to target a reporter for this network, as an un-indicted co-conspirator?” Cruz said. “I mean, that is without precedent and, unfortunately, I think it is part and parcel of a pattern, from this administration, of not respecting the Bill of Rights.”

That’s it, open and shut. Holder said “With regard to the potential prosecution of the press for the disclosure of material, that is not something that I’ve ever been involved in, heard of or would think would be a wise policy.”

Rosen wasn’t indicted, he wasn’t charged, and he wasn’t even the target of the investigation. Those who believe that Holder perjured himself are laboring under a misconception that Kornacki voiced later in the segment. “When I hear that argument, that they weren’t actually going to charge him, and just listed him this way, is this is a search warrant application,” Kornacki said. “You are listing him this way, as co-conspirator. You are saying ‘We could, we could if we wanted to.”

What the warrant application (which it seems no reporters have read) actually says is that “if we perform this search, and find evidence of the crime that probable cause suggests may have occurred, then we can charge him.” From that warrant application:

What has been lost in the understandable reflex to protect press freedom is the fact that, as Krystal Ball pointed out, not everything is legal just because a journalist is doing it. Unfortunately, dissenters Ball and Norm Ornstein seem to want the government to preside over journalists’ ethics. Ornstein pointed to the irresponsibility of the leak, and the ignobility of the reporter’s and source’s motives. While I agree that both acted disgracefully, it should not be the government’s job to decide whether James Rosen is practicing good journalism, or engaging in reckless self-promotion and activism. That’s the job of other journalists, a job they are failing at spectacularly. If Jake Tapper had somehow obtained these emails, instead of the DOJ, reporters would be running Rosen out of the job on a rail.

By extension, Krystal Ball’s concern over the possible consequences of a leak ought not be the determining factor of criminality, since the government would again be charged with weighing the journalistic merits of a leak against those consequences. It is the government’s job to protect its own information, not the press’, so in Ball’s hypothetical, in which our North Korean insiders are killed, it would be the leaker, Stephen Jin-Woo Kim, who would bear the responsibility. In order for Rosen to be charged, there would need to be some additional element, something that differentiated his actions from those of a reporter (even a disgracefully bad one) and those of a criminal.

That crucial difference is intent. When the FBI applied for that warrant, they did so on the basis of emails, between Rosen and Kim, that raised the possibility of a criminal conspiracy. In Rosen’s own words, his intent was not simply to report information vital to the public interest, or even just “breaking news ahead of my competitors,” but to “force the administration’s hand to go in the right direction.”

Rosen doesn’t explain what “the right direction” is, just that he would like to exploit classified information to achieve it. The FBI also had the effect of Rosen’s “scoop” to go on, which everyone seems to agree was useless, from a news perspective. Kornacki, later in the show, even parroted Jon Stewart‘s talking point that Rosen’s actions were harmless, because his “scoop” was so obvious.

What Stewart and Kornacki ignore, willfully or not, is that in reporting essentially nothing, Rosen revealed that the U.S. had intelligence sources within North Korea, sources that even Rosen acknowledged were extremely difficult to develop. In fact, it is the very lack of any real news value in that report which makes Rosen’s decision so puzzling. It’s like Rebel Alliance News reporting that “Bothan spies, deep inside the Empire command structure, tell us that Darth Vader’s helmet is black, and also that the snow on Hoth is, and this is a quote, ‘cold.’”

In the name of reporting essentially nothing, Rosen provided Kim Jong-Il with a narrow pool of people to “investigate” for espionage. In short, Rosen aided a hostile foreign government, with no apparent journalistic benefit. Why would anyone do that?

In their warrant application, the DOJ explicitly says they’re seeking to gain further evidence against Kim, and to determine the intent of both parties. Since Rosen was never charged, it’s fair to assume they found no criminal intent. However, hypothetically, if a reporter wanted to leak top secret information for the sole purpose of aiding a hostile foreign government, that would be a crime. If a search revealed an email detailing that intent, it would be evidence of a crime.

Did the DOJ really think they were going to find an email in which James Rosen told Stephen Kim “And by ‘the right direction,’ I mean anything which would aid our Dear Leader in foiling America’s attempts to defeat him?”

Probably not, but that’s not really the point. The question is whether they intended to prosecute James Rosen when they applied for that warrant, which the warrant application itself refutes. It says explicitly that the material they sought “could be expected to constitute direct evidence of their guilt or innocence” by determining “Mr. Kim’s and the Reporter’s intent” in disclosing classified materials.

I like Steve, but in the segment that followed, he also disturbingly suggested that because the repressive North Korean regime is so good at obscuring what it may or may not have done to those U.S. sources, or those suspected of being U.S. sources. “Part of this is tough to establish this because so much of this information is classified,” he said, before citing Jon Stewart’s lie. What does Kornacki expect the government to say, at this point? “Damn, they killed our sources, now we have NO idea what the f**k’s going on in North Korea.”

Or maybe “No worries, our North Korean sources are all good, fellas, they tortured and killed the wrong guys?”

The press is rightly disturbed about the AP leak probe, and should unquestionably look into the facts of the Rosen case, but unfortunately, they have consistently refused to do that. They are not the same thing. In the process of circling the wagons around James Rosen, they are protecting some of the very worst practices of their profession, and ignoring key questions, like who told James Rosen it was his job to manipulate U.S. foreign policy? Read the documents.

Here’s the clip, from MSNBC’s Up with Steve Kornacki: