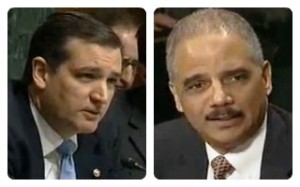 On Tuesday, the Department of Justice sent shockwaves through the nation when Attorney General Eric Holder informed Sen. Rand Paul (R-KY) in writing that the White House would be within its legal authority to execute an American citizen via drone on U.S. soil if that person was determined to pose a threat to national security. On Wednesday, testifying before a Senate panel, Holder was prodded repeatedly about this assertion by Sen. Ted Cruz (R-TX). Holder eventually admitted that it would not be constitutional to execute an American citizen without due process.

“In your legal judgment, does the Constitution allow a U.S. citizen on U.S. soil to be killed by a drone?” Cruz asked Holder pointedly.

“For sitting in a café and having a cup of coffee?” Holder replied. Cruz clarified that his hypothetical individual subject to a drone strike did not pose an “imminent and immediate threat of death and bodily harm,” but that person is suspected to be a terrorist.

“I would not think that that would be an appropriate use of any kind of lethal force,” Holder replied.

“With all respect, Gen. Holder, my question wasn’t about appropriateness or prosecutorial discretion. It was a simple legal question,” Cruz clarified.

“This is a hypothetical, but I would not think, that in that situation, the use of a drone or lethal force would not be appropriate,” Holder replied.

“I have to tell you I find it remarkable that in that hypothetical, which is deliberately very simple, you are not able to give a simple, one-word answer: no,” Cruz added. He said he think that his scenario would constitute a “deprivation of life without due process.”

Holder agreed and added that lethal force in Cruz’s case “would not be appropriate.”

“You keep saying appropriate – my question isn’t about propriety,” Cruz goaded. “My question is about whether something is constitutional or not.”

When Cruz was about to abandon his line of questioning after a number of equivocations from Holder, the attorney general clarified that he was saying “no” such actions would not be constitutional.

Watch the clip below via CSPAN-3: