Ted Cruz on Nugent’s ‘Subhuman Mongrel’ Comments: ‘I Don’t Agree with Them’
video

Ted Cruz on Nugent’s ‘Subhuman Mongrel’ Comments: ‘I Don’t Agree with Them’ 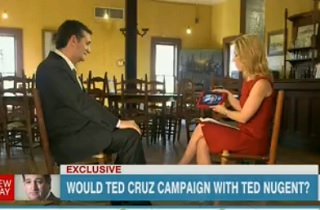 Rocker and Senior Fellow at the DefeCato Institute Ted Nugent is a hot topic on CNN this week by virtue of his dual statuses as user of Nazi rhetoric and campaigner for gubernatorial candidate Greg Abbott (R-TX). CNN’s Dana Bash confronted Abbott’s home Senator Ted Cruz (R-TX) about the decision to campaign with a man who, scant weeks ago, called President Obama a “subhuman mongrel,” and Cruz took aim at Nugent’s comments with no barrels.

In January, Nugent called the President a “subhuman mongrel” (and a “chimpanzee”), a remark in keeping with Nugent’s long history of such gentility, but the comments became news this week when Greg Abbott decided to have Nugent join him onstage at campaign events. Wolf Blitzer zeroed in on the Nazi origins of Nugent’s phrase, and wondered if Abbott’s decision to embrace Nugent would, or should, damage him politically. Nugent, for his part, responded by calling Wolf Blitzer a Nazi, and bailing on an interview with Erin Burnett.

On CNN’s New Day, political correspondent Dana Bash confronted Ted Cruz with a video recording of Nugent’s January remarks. “That’s Ted Nugent,” Bash observed. “He’s campaigning here with the leading Republican candidate to be your next governor. Is that appropriate, for them to campaign together?”

Cruz, no lover of Nazis, replied “Look, I had not seen that video until you just played it.

“What do you think of it?” Bash probed.

“I think it is a little curious that — to be questioning political folks about rock stars,” Cruz said, and added, with a self-effacing laugh, “I got to tell you, listen. I’m not cool enough to hang out with any rock stars. Jay-Z doesn’t come over to my house. I don’t hang out with Ted Nugent.”

“Jay-Z doesn’t call the president a subhuman mongrel,” Bash replied, adding, “Is this an appropriate thing to say?”

Cruz then spontaneously thought up the same exact thing that Newt Gingrich said yesterday, replying “I would be willing to bet that the president’s Hollywood friends have said some pretty extreme things.”

“The reason I played that for you is this week in Texas, he was invited to campaign with the man who may be your next governor in your party,” Bash pressed.

“Those sentiments there, of course I don’t agree with them,” Cruz replied, and added “You’ve never heard me say such a thing, nor would I.”

But Cruz also added that there’s a reason people listen to Nugent: “He has been fighting passionately for Second Amendment rights.”

Asked if he would campaign with Nugent, Cruz said, “I haven’t yet, and I’m going to avoid engaging in hypotheticals.”