Ted Cruz Reacts To James Carville’s Praise: Some Say I Lack Civility And Have ‘Insulted Me While Doing So’
video

Ted Cruz Reacts To James Carville’s Praise: Some Say I Lack Civility And Have ‘Insulted Me While Doing So’ 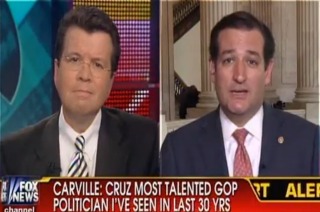 Sen. Ted Cruz (R-TX) appeared on Fox News Channel on Monday with Neil Cavuto on Monday where he was asked to react to praise he recently received from Democratic strategist James Carville. Cruz said that he thought Carville’s comments were flattering and added that he endeavors to be “polite and respectful” to everyone he encounters. However, Cruz noted that he has been criticized for being uncivil by people who have, oddly, insulted him while making that point.

Cavuto asked Cruz for his reaction to Carville who recently praised the freshman Texas senator on ABC’s This Week for being “the most talented and fearless Republican politician” he’s seen in the last three decades:

“Those were very, very kind comments,” Cruz said. “I was certainly flattered.”

“I will say, in most other circles, saying that you’re one of the better politicians is not much of a compliment in most of America,” he added with levity.

“I found it amusing that people – a number of people have criticized me on the grounds of civility and, in particular, have insulted me while doing so,” Cruz continued. “I have not and will not reciprocate.”

“My approach is to always endeavor to be polite and respectful to anyone I’m dealing with, but, at the same time, to defend common sense, conservative principles that, I think, are the values that are held throughout America in both red states and blue states,” he concluded.