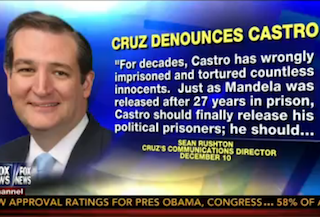 Sen. Ted Cruz (R-TX) sought to regain some of the conservative credibility he appeared to have lost when he praised Nelson Mandela on his Facebook page this week when he walked out of the South African leader’s memorial service during Cuban President Raul Castro’s speech. But unlike the Obama-Castro handshake seen around the world, it appears that no one caught Cruz’s protest on camera.

So Cruz did the next best thing. He told the media what he did and why he did it. As Salon’s Joan Walsh points out, the ABC News headline that broke the story says it all: “Cruz Says He Walked Out of Mandela Service When Raul Castro Spoke.”

That story consists almost entirely of a statement from a spokesperson for Cruz:

“Sen. Cruz very much hopes that Castro learns the lessons of Nelson Mandela. For decades, Castro has wrongly imprisoned and tortured countless innocents. Just as Mandela was released after 27 years in prison, Castro should finally release his political prisoners. He should hold free elections, and once and for all, set the Cuban people free.”

That quote was featured in stark contrast to Obama’s handshake on Wednesday morning’s Fox & Friends. While Brian Kilmeade argued that Obama’s handshake “had to be intentional,” Steve Doocy suggested that maybe Obama “didn’t recognize” the Cuban leader. “Who knows?”

Cruz’s father was born in Cuba and actually fought on the side of Fidel Castro in the Cuban Revolution before becoming a critic of his Communist ideology and fleeing to Texas at age 18 in 1957.