Christopher: Nugent and Abbott Big TV News This Week, Except on Fox 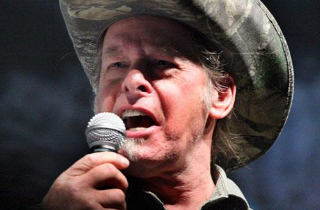 This week, decorated (with poo) veteran (of phallic gun fantasies about other men) and Cat Scratch Fever-sufferer Ted Nugent has been the subject of a shitstorm that isn’t in his own pants. The Motor City Madman was called out by CNN’s Wolf Blitzer for using Nazi terminology against President Obama, then campaigning onstage with Texas Attorney General and gubernatorial candidate Greg Abbott (R-TX). The story has been all over cable news this week, with the exception of Fox News.

In January, Nugent called the President a “subhuman mongrel” (and a “chimpanzee”), a remark in keeping with Nugent’s long history of such gentility, but the comments became news this week when Greg Abbott decided to have Nugent join him onstage at campaign events. Wolf Blitzer zeroed in on the Nazi origins of Nugent’s phrase, and wondered if Abbott’s decision to embrace Nugent would, or should, damage him politically. When Nugent introduced Abbott as his “blood brother,” an innocuous phrase on its own, but extremely loaded in the context of the “subhuman mongrels” remark that both he and Abbott have been repeatedly asked about, Blitzer and Gloria Borger intensified their criticism of Abbott. Nugent, for his part, responded by calling Wolf Blitzer a Nazi, and bailing on an interview with Erin Burnett.

Greg Abbott’s Nugent dilemma isn’t a new thing; the rocker caused a mild headache for former Governor Mitt Romney (R-MA) in 2012 over whether the then-Republican presidential candidate had sought and welcomed the controversial figure’s endorsement (yes and yes). While Romney tried to back away from Nugent, Abbott has continued to campaign with him. The story has been big news on the cable nets this week:

You may have noticed that there were no clips from Fox News in there. Of course, Media Matters certainly did. The obvious reaction would be: “Of course MSNBC is going to cover it,” and CNN’s focus on the issue has already been characterized by conservatives as a selective partisan overreaction. So why would Fox News play along?

There are some legitimate criticisms to be made of CNN, not the least of which is why it took them so long to notice remarks that we reported on weeks ago. A decent explanation for that is that it was only Nugent’s participation in Abbott’s campaign that made them newsworthy. It would also be fair to note the quantity of coverage that CNN has given this story, even dwarfing that of MSNBC’s opinion programming. On the other hand, Nugent has made CNN part of the story by responding as he has.

But Blitzer’s assessment of Nugent’s comments is as unassailable as it gets, and the Romney campaign shows that there is a precedent for this. That unassailability is the easy answer for why Fox News hasn’t mentioned Nugent on air since Bill O’Reilly interviewed him about Beatlemania a few weeks ago. Even the conservative opinion hosts clearly understand that there is no benefit to defending Nugent on this count, even at the expense of rival CNN. Fox’s Sean Hannity was willing to defend Nugent over his violent fantasies about President Obama, but there is no constituency in the Fox News audience for Nazi rhetoric.

No, the real story here is that Fox has also stopped talking about Greg Abbott. Aside from a single passing mention about early voting in the Texas primaries on Tuesday, Abbott’s name has been missing from Fox News since February 6, after receiving near-constant coverage, in January, of his race against State Senator Wendy Davis (D-TX). They could ignore the Nugent controversy and still cover the campaign, or make hay over the media “double-standard” that Newt Gingrich ran up the flagpole, but there has only been silence. That, more than anything being said on CNN, is a pretty clear indication that Nugent really is a problem for the candidate.