Ted Nugent Is Livid At The “Rotten, Soulless” Parents Of “Blubbery” Kids 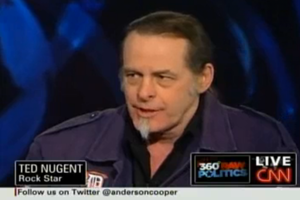 It seems that Anderson Cooper can’t get enough of hunter/rocker Ted Nugent on his special edition of 360º, and, as an opening act, Nugent sure is giving Piers Morgan a run for his money. After mocking CNN for hiring Eliot Spitzer earlier this week, Nugent went all out against a less risky target on a topic near and dear to his heart: obesity.

Nugent, who has advertised his love of fitness and is a well-known advocate of keeping healthy, took a detour from criticizing last year’s health care bill to scold America for not taking better care of their bodies. “Instead of squawking about health care,” he chided, “why doesn’t America start caring about their health?” His outraged turned against people who “treat their sacred temple with such disrespect,” Nugent called for a leader to talk “in serious terms to their constituency– take better care of yourself.”

Childhood obesity in particular flustered the boisterous rocker, who had previously noted, as Cooper recalled, that “our kids have a layer of blubber,” which sent Nugent on another tangent– “if your kids have blubber, you are a rotten, soulless parent.” He blamed them as well as anyone without a good health regiment for America’s “emergency in health care” and implored Americans to realize that “you’re killing yourselves out there.”

Paul Begala, meanwhile, who was on deck to discuss politics with Cooper and Nugent as well, took the opportunity to defend First Lady Michelle Obama‘s health initiatives… and point out that Nugent’s political pal and fellow “fitness buff” Sarah Palin wholeheartedly opposed her attempts to get children to eat healthy. Nugent defended his “friend” by sitting strongly on the fence, calling for leaders to tell people to be healthy while opposing health “being pushed and forced by the government,” which one would interpret as support for telling people to be healthy without banning unhealthy products or behavior– more of a Newark than a San Francisco approach.

Nugent’s rant and the subsequent discussion from last night’s Anderson Cooper 360º via CNN below: