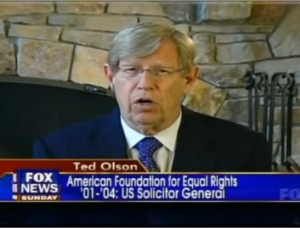 Ted Olson appeared yesterday on Fox News Sunday to discuss this week’s landmark gay marriage ruling overturning Prop 8 in California — and it should be required viewing in every law school — and every newsroom — around the country.

I’m pro gay marriage, but that’s not why. Olson’s logic, his clear, cogent reasoning based on specifics and facts, the methodical rooting of his argument in long-standing principles of this country — that’s why. His rhetorical flair and points of emphasis are worth learning from as well, but the real star of this appearance was his flawless, unshakable reasoning.

There are basically two points of attack on this ruling that neatly sidestep the more homophobic arguments (i.e. that gay marriage is wrong, harmful to children and families, etc.) on this issue: (1) Judicial activism – How can one judge overrule the votes of millions of people? and (2) Where is there a right to same-sex marriage in the Constitution?

Seven million people voted! Now a single judge overrules all of them? That, by the way, is a direct quote from Chris Wallace, who posed variations on that question numerous times. Ted Olson did not dispute the importance of those votes — he just neatly explained how they don’t trump fundamental rights.

That’s why we have an independent judiciary. We do not put the Bill of Rights to a vote. Forty-one states once prohibited interracial marriages…part of our Constitution is a separation of powers and an independent judiciary. We ask judges to make sure that when we vote for something we’re not depriving minorities of their constitutional rights. And that’s what the judge did.

BOOM. That’s it, in a nutshell — the most fundamental of principles, the bedrock return to the self-evident, inalienable right that all are created equal and equal in their right to the pursuit of happiness. Even when Wallace continued to describe the judge’s ruling as judicial activism (“but as a leading conservative lawyer, you have condemned such judicial activism in the past”), Olson implacably returned to that simple, bedrock principle:

Since 1888 the United States Supreme Court has 14 times decided and articulated that the right to marriage is a fundamental right. We’re not talking about a new right here… We do not permit discrimination, inequality. That’s why we have a 14th Amendment that guarantees equal rights to all citizens. It’s not judicial activism when judges do what the Constitution requires them to do, and they follow the precedent of previous decisions of the Supreme Court.

Again, BOOM! “It’s not judicial activism when judges do what the Constitution requires them to do, and they follow the precedent of previous decisions of the Supreme Court.” That goes straight to the heart of gay marriage opposition, and blasts it to smithereens.

Olson didn’t need to bring the scorching history of racial discrimination into it to prove his point — but tactically, it was brilliant:

If 7 million Californians were to decide that we should have separate but equal schools, or that we would send some of our citizens to separate drinking fountains, or have them be in the back of the bus, that would be unconstitutional.

Not only did Olson draw a moral parallel between discrimination against African-Americans and same-sex discrimination, but he linked it to something clearly out of date and in the past. That’s a damning link, and backdates opponents of gay marriage to some of the worst moments in the nation’s history.

Olson handled the second question — “Where is the right to same- sex marriage in the Constitution?” — with equal aplomb, with a simple yet devastating analogy: “Where is the right to interracial marriage in the Constitution, Chris?” BOOM! Once again, that damning link. This time, though, that connection was necessary — because in returning to those 14 times that marriage had been guaranteed as a fundamental Constitutional right, he took the modifiers to each case and instead of allowing them to exclude same-sex unions, he used that as a point of inclusion. Of course it’s never been written. We’re not talking about just one kind of marriage here, we’re talking about a fundamental. Marriage. Full stop. Under that one loving umbrella, all citizens of these United States.

Two other arguments Olson posed have gotten attention, and they were damn clever ones. The first one was Olson’s comparison of Fox News to gay couples, which has tickled the Internet greatly. “Would you like Fox’s right to free press put up to a vote and say, “Well, if five states have approved it, let’s wait till the other 45 states do?” said Olson. “These are fundamental constitutional rights.” Apples and oranges? Sure. Point made? Damn straight.

Chris, we believe that a conservative value is stable relationships and a stable community and loving individuals coming together and forming a basis that is a building block of our society, which includes marriage…We also believe that it’s an important conservative value to sustain the rights of liberty of our citizens and to eliminate discrimination on invidious bases, whether it’s race, or sex or sexual orientation. It should be a liberal and a conservative value. It is a fundamental American value.

Tying same-sex marriage to conservative values and the protection of equal rights to patriotism was a delicious tactical move, appropriating the very rhetoric of opponents to make the case. Both that and the Fox News free speech example were fantastic tactical moves, and great lessons in rhetoric and argument construction, but this segment rises and falls on Olson’s clear, unshakable logic supporting gay marriage as a bedrock part of the nation’s fundamental judicial history. It’s not about fear, or prejudice, or “how it’s always been done” — it’s about equal rights for all citizens, and the never-ending pursuit of a more perfect Union — on mission since 1776.

Watch the full clip below. And learn.