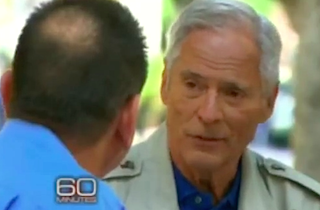 After spending decades traveling to war zones to report for CBS News and 60 Minutes, Bob Simon was killed in an accident while sitting in back seat of his town car in New York City at the age of 73. Now in a bizarre coda to this tragic story, it turns out that very death was predicted by the mayor of Tel Aviv during a story Simon reported in that Israeli city in 2012.

In the 60 Minutes piece, highlighted by Haaretz’s Allison Kaplan Sommer on Thursday, Simon was talking to Mayor Ron Huldai about the dangers of living under the threat of rocket fire from Gaza when the mayor turned around and offered up what is now an eerie premonition about his death.

“What else can we do?” the mayor replied. “When you go out of your home in New York, you have the chance to get in a car accident.”

“Yes, you have the chance to get in a car accident but you know that New Jersey doesn’t have missiles pointing at you,” Simon reasoned.

“Yes, but in life you know you have a lot of risks. Always!” Huldai said in response.

There is no way he could have known how true that statement would become.