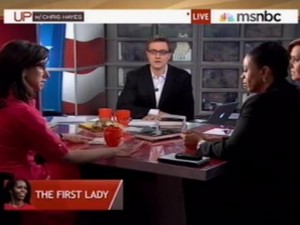 On Saturday mornings’s Up with Chris Hayes, journalist and MSNBC contributor Karen Hunter challenged The New York Times‘ Jodi Kantor over her motivation for writing the buzzed-about tome The Obamas. Hunter leveled a highly-charged criticism at Kantor, mentioning her “seven figure” payday, and wondering “What was your motivation for doing it?”

Kantor’s response seemed to be leading to a crackling exchange, but host Chris Hayes swooped in and changed the subject.

Upon publication last month, The Obamas dominated the news cycle on the strength of a few anecdotes that captured the media’s imagination, which resulted in some pushback from the White House, and from Mrs. Obama. While Hayes and Salon‘s Joan Walsh each said they had read the book, and that the First Lady comes off sympathetically, the bits that he media focused on painted a picture of dissension between the East and West Wings. The White House line has generally been that these anecdotes have been blown out of proportion, without proper context, and don’t properly represent the truth.

As with previous books about this White House, discussion in the media has often turned to the ways in which authors can polish up the mundane in order to hype book sales, and perhaps justify their time and expense.

This seemed to be on Karen Hunter’s mind when she engaged Kantor. “I haven’t read the book,” she began, adding “No disrespect, don’t plan on reading it, but as the only publisher on this set, I also understand kind of the pressures to produce — you got seven figures for this. You got a lot of money to write this book, which means that you had to deliver certain things that I, quite frankly, don’t think you could have, you know, given the amount of money that you were offered to do this book.”

Kantor began by explaining that she’s been on the Obama beat for five years, that she had the cooperation of the White House (more on that from Jay Carney here), and that “the entire book was fact checked with its sources and cross-checked with other people in the White House. Nobody has challenged the reporting in the book. Nobody has come forward to say, Michelle Obama didn’t do that, she didn’t have that dispute.”

Hunter interjected, “But there is a tone.”

“Excuse me,” Kantor scolded. “Please let me finish. I think that, first of all, you never do your work as a reporter based on how much you’re being paid for it.”

That statement elicited a laugh from Hunter.

“Whether you’re being paid a lot or a little, you always try to ascertain the same standards of fairness and accuracy.”

She went on to explain that the book explores the arc of the Obamas, as a closer-to-ordinary couple adjusting to life in the White House, in the presidency. “I didn’t have any of the confidential that I learned about Michelle Obama’s initial unhappiness in the White House, and her turnaround about the conflict between the East and the West Wing. The nature is you never know what you’re going to discover along the way.”

Unfortunately, the exchange ended there, as host Chris Hayes swooped in to put the conversation back on the broader track it started on. Hunter was, apparently, not satisfied with Kantor’s response, as she has expanded on the critique on Twitter since then.

I haven’t read The Obamas, either, but Ms. Kantor’s response didn’t really address the substance of Ms. Hunter’s critique. It is entirely possible to get all of your facts straight, yet still get the story wrong, especially in a book. One great illustration of this is the “Secret Halloween Party,” which Kantor got factually right (for the most part), but which she placed in a wholly unfair frame.

However it applies to The Obamas, Hunter’s observation could as easily be applied to the broader media landscape. The political news cycle has become a machine, with huge amounts of time and money devoted to keeping it running 24/7. As a result, there always has to be some huge thing to talk about, so everything that can be hyped most certainly will be hyped. It’s a journalistic Field of Dreams, except here, the mantra is “If you build it, they better come!”