Terror Expert: Boston Attack More Columbine More Than 9/11, These Are ‘Murderers Not Terrorists’ 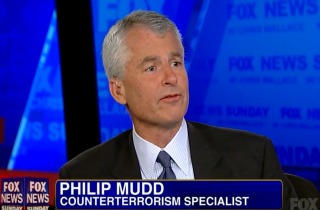 Philip Mudd, former counterterror expert for the CIA and the FBI, joined Chris Wallace on Fox News Sunday to discuss the nature of the threat posed by the Tsarnaev brothers and any network they may have been associated with in the wake of the Boston Marathon bombings. He said the Boston attack reminded him more of the 1999 attack on Columbine than a terror event orchestrated by a foreign network. “I would charge these guys as murders not terrorists,” Mudd said of the suspects in the attack on the Boston Marathon.

“Do you think we have to fear copycats – more of these small, domestic terror cells – and how does law enforcement need to respond more effectively, not necessary to catch them, they did that pretty well, but to prevent it in the first place,” Wallace asked Mudd.

Mudd replied and said that copycat threats almost always materialize after a widely covered attack like the one that occurred in Boston last Monday.

“What I fear though is that people too quickly categorize this as terrorism,” Mudd added. “This looks more to me like Columbine than it does like Al Qaeda.”

“Two kids who radicalized between themselves in a closed circle and go out and commit murder,” Mudd observed. “I would charge these guys as murderers, not terrorists.”

Wallace pushed back on this and said that Russian authorities had identified the elder Tsarnaev brother as being influenced by radical Islam while in Chechnya. “How can you write off the idea that there was some outside influence here?” Wallace asked.

Mudd said that he’s not writing that off, but the term ‘terrorism’ was a misleading way to characterize the Boston attack. “The psychology is not that simple,” Mudd noted. “It’s two kids who decided for whatever ideology that they wanted to commit murder.”

“The murder piece is as significant as the terrorism piece,” he concluded.