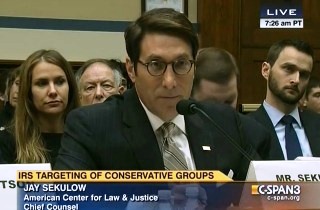 During a congressional hearing into the Internal Revenue Services’ admitted targeting of conservative groups prior to the 2012 election cycle, an attorney representing some of those groups severely chastised President Barack Obama for asserting during an interview with Fox News Channel host Bill O’Reilly that there was not a “smidgen” of corruption at that agency. After citing a number of items of evidence which support the claim that the IRS unfairly targeted conservative groups, attorney Jay Sekulow said that the IRS scandal goes “as high as it gets.”

Rep. Ron DeSantis (R-FL) began by asking attorney Cleta Mitchell if she agreed with the president’s argument that the IRS was targeting both liberal and conservative groups with undue scrutiny.

“Absolutely false,” Mitchell replied. She cited a report which revealed that of 162 organizations being scrutinized by the IRS, 83 percent of them were conservative groups. She went on to identify an instance where one of those liberal groups was approved much faster than the conservative group, prompting laughs from the assembled members of Congress.

Sekulow turned to focusing on the “chilling effect” that has resulted from the IRS’s targeting of conservatives. He cited a pro-life group that was scrutinized and asked “draconian” questions about that group’s mission.

Sekulow read from a document questioning the logic and methodology of that pro-life group’s mission. The IRS agent criticized that group for making conclusions “more on the basis of strong emotional feelings than objective valuations.”

“Who gave the IRS the authority to say this?” Sekulow asked. “And how is it that the president of the United States can say there’s not a smidgen of corruption?”

“By the way, some of these signed by [former IRS official] Lois Lerner,” he added. “The agents told our clients it was being managed out of Washington.”

“I would urge the committee, when you start talking about associate chief counsels, divisional counsels, this is as high as it gets,” he concluded.

Watch the clip below, via C-SPAN 3: