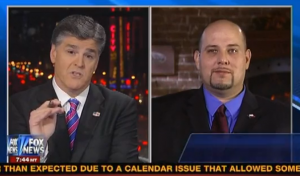 Following the election, there’s been a petition on the White House website for Texas’ secession. On his show Tuesday night, Sean Hannity spoke with the president of the Texas Nationalist Movement, Daniel Miller, who explained their cause — and just why they feel Texas needs their independence.

The petition asks the Obama administration to “peacefully grant the State of Texas to withdraw from the United States of America and create its own NEW government.” Given “that the state of Texas maintains a balanced budget and is the 15th largest economy in the world,” it adds, “it is practically feasible for Texas to withdraw from the union, and to do so would protect it’s citizens’ standard of living and re-secure their rights and liberties in accordance with the original ideas and beliefs of our founding fathers which are no longer being reflected by the federal government.”

“I think we’re faced with the reality that the union has fundamentally changed,” Miller said. “We’ve got a federal government that treats states like Texas as a cash cow, that has no regard for the sovereignty of the states and really treats us merely like an administrative subdivision of the whims of the federal government. We have seen, indeed, the fundamental transformation of what the union is and our organization is committed here to preserve the freedom and independence of Texas.”

Hannity went on to ask how, constitutionally, they have the right to do this — and what the movement wants to do next. Miller said the petition is basically asking the president, “Mother, may I?” It “will accomplish virtually nothing” — “but it will send a clear message that the people of texas want their independence.”

Ultimately, he said, any decision about a state leaving the union must come down to the vote of the state’s people. To that point, Hannity asked whether he’d like to see a referendum on the issue. Whether the goal is to get the issue on the ballot.

“Ideally what we would like to see is the legislature put it to a non-binding referendum,” Miller explained. “So the people of Texas could express their will on this issue. The polling we have done internally in our organization in every county in Texas shows we would carry a majority of Texas, but I think that takes us to the next step here.”

Many people don’t understand why the state would want independence, he acknowledged — going on to explain why he feels it’s necessary: