Texas Teacher Suspended For Mocking Muslim Student After Bin Laden Death: ‘I Heard About Your Uncle’ 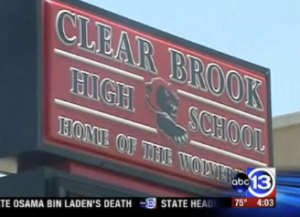 A Texas high school teacher has been suspended after mocking a student about the death of Osama bin Laden. Houston station KTRK reports the teacher singled out a student in a ninth grade algebra class. “The teacher told the student that ‘I bet you’re grieving.’ And she basically looked at him and said what are you talking about? And he said I heard about your uncle’s death and she said wow, because she understood that he was referring about Osama bin Laden being killed and was racially profiling her.”

The girl, an American-born girl of Muslim faith has not been identified, nor is she believed to be related in any way to bin Laden. The mother said, “The student ended up crying over what was said to her by the teacher and the teacher asked her why she was crying and another student said it was because of what you said earlier. And his response was, oh, OK, and just kind of smirked and giggled and walked away.”

“In the Clear Creek Independent School District, we believe diversity strengthens our community and seek opportunities to celebrate the different cultures within our schools and neighborhoods. The sentiments allegedly shared by this teacher are not reflective of the staff at Clear Brook High School or anyone within the Clear Creek Independent School District. In accordance with CCISD policy, the teacher has been placed on administrative leave pending the outcome of a personnel investigation.

The student did the right thing and immediately notified an adult regarding the teachers’ comments. The principal at Clear Brook High School notified the child’s parents and has been in communication with the family.” -Elaina Polsen, Director of Public Information, Clear Creek Independent School District

Watch it here, from KTRK: