That ‘Drunk Girl’ Viral Video Was a Hoax; Men Claim They Were Misled
Video

That ‘Drunk Girl’ Viral Video Was a Hoax; Men Claim They Were Misled 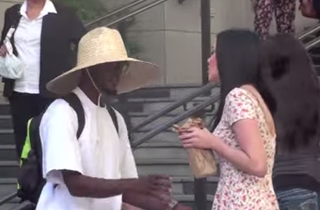 The men who appeared to be taking advantage of a drunk woman in a viral video are speaking out, claiming that they were asked to be in a comedic sketch, and slamming the video’s co-creators for misleading them.

According to TSG, the entire video was staged, and the men were allegedly asked on the street to participate in a comedy video — or, in one case, a student film — with an actress. No release forms were provided, says two men involved in the shoot, and its subjects were not told about the nature of the film, which branded itself as a “social experiment” in the vein of a recently famous video of a woman being cat-called in New York City. (In addition, Stephen Zhang, one of the video’s creators, works for a viral marketing firm.)

Josh Blaine, a Hollywood tour bus driver, told his Facebook friends that he’d been approached by a camera crew to participate in a “funny skit,” but only learned of the video’s faux-reality nature when it went viral. “this is what I get for being agreeable to someones project,” he wrote. “here’s to watching my back with virtually no friends. fuck my life.”

Another participant, Mike Koshak, also claimed that the entire video was staged, and lost his job due to the fact that he was wearing a shirt with his company’s logo in it, as a result: “It’s a false ass portrayal and I was lied to about what the video even was. Faulty ass shit.”

For some reason, the video’s co-creator, Seth Leach, apparently seems to think that everything is cool and that nobody’s reputations were ruined:

In response to those protestations, Leach, 22, sent Koshak a private Facebook message acknowledging that the video was staged. “The important thing to consider,” Leach wrote, “is that this video is going to get you well known and have a future with us and our company.”

After promisisng Koshak a night of free drinks, Leach said, “We are going to be huge and you are apart of it. Just go with it dude, you are in our team now and we will take care of you.”

In a Facebook post yesterday crowing about the viral success of “Drunk Girl In Public,” Leach (seen at left) wrote that the clip was “on the homepage of pretty much every news and media website you can think of.” He then told of “heading out to LA again tomorrow and creating some more viral videos for your viewing and learning pleasure!”

For those who forgot, it was this video:

[The Smoking Gun]
[Image via screenshot]