That Profane And Weird ‘CNN Russia’ Website? Nobody Knows Who Owns It, But It’s Definitely Not CNN 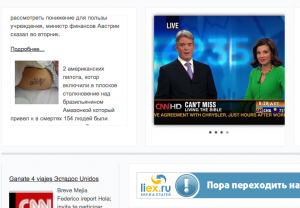 The “CNN Russia” website, it turns out, has nothing to do with CNN. “I can confirm this is not a CNN site,” Claudia Coles, a London-based rep for the network, told The Moscow Times. “We are evaluating next steps.” The Times also talked to CNN Moscow bureau chief Maxim Tkachenko, who said CNN doesn’t have a Russian-language website.

And it turns out the folks behind this one aren’t so great with the Russian anyway:

News articles posted on the site are filled with gibberish, reminiscent of text run through an automatic translation program. The articles contain spelling errors and unintentional obscenities, many of which are unprintable in a family newspaper. In one of the more tame examples, one article described Dominique Strauss-Kahn, the embattled former managing director of the IMF, not as “IMF head” (golova) but as “IMF glans penis” (golovka).

So far, the people behind the site remain a mystery, as Agence France-Presse reported:

The site had been visited more than 1,700 times on Wednesday, according to the Live Internet ranking website, and carries ads for Russian brides.

It was unclear who was behind the website, although it links to a LiveJournal page that says its owner is from Ivanovo, a town famed for its cotton mills in central Russia.