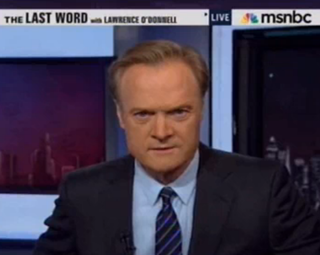 With Osama bin Laden the top story on every cable news station today, one would be forgiven in believing that America has somehow sunk into a timewarp back to 2004. Adding to the surrealism today? The 8PM news hour on MSNBC opening up shop with an anti-Bush monologue laced with quotes from the President on al-Qaeda, courtesy of Lawrence O’Donnell.

Introducing his program with the statistics on how long it took President Obama to capture Bin Laden versus Bush (831 days compared to thousands), O’Donnell revisited the topic later in the program, analyzing the shift in rhetoric in the Bush administration once the objective of capturing bin Laden proved near impossible. Playing a clip of President Bush at a press conference six months after claiming he would find bin Laden “dead or alive,” he found that Bush’s rhetoric shifted to “truly not [being] that concerned about him,” and, in 2005, closing down a special CIA unit dedicated to finding bin Laden. “In 2005,” O’Donnell noted, “we knew the home was built for him… somehow that year bin Laden got the feeling that he could settle down comfortably in a walled fortress in a Pakistani suburb.” Despite him hiding in plain sight, O’Donnell argued that the Bush administration had no idea where to look, and so shifted priorities. “They could not allow the perception of their success in their war on terror to turn on the capture of one person, a person they did not know how to find,” O’Donnell noted.

Meanwhile, candidate Obama was challenging Pakistan to give information, O’Donnell highlighting a debate clip from the era where Obama noted he would make catching bin Laden a top priority and defy the Pakistani government if necessary to find him, and praised the President for keeping his promise.

O’Donnell, to many of those on the left who admire him, may have a point– just as those who have politicized the issue by arguing that it was the intense interrogation techniques at Guantanamo Bay that brought bin Laden to justice might, too. But dedicating so much of a program about American victory to the partisan fabrication of American failure after last night feels at least a little too soon.