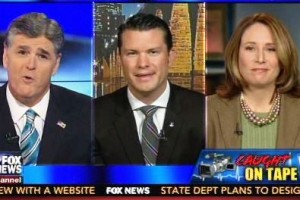 Now that President Obama‘s promise that “if you like your plan you can keep your plan” has turned out to be not exactly correct, there is a rough consensus in conservative media that the president flat-out lied. So when Democrat Ellen Qualls attempted to defend Obama’s remark on Hannity Tuesday night, that set Sean Hannity off and they got into an intense shouting match over whether it was a lie or not.

After taking on the undercover video from James O’Keefe‘s Project Veritas showing health care navigators suggesting people lie about medical information, Qualls tried to turn the tables on Hannity, telling him that the rollout was “embarrassing,” but Obamacare essentially “was the Republican plan in the 90s.”

Hannity fired back, “That’s a lie!” He repeatedly pressed her to say whether Obama lied about people keeping plans. She said, “He told the truth for the 95 percent,” and after continued questions, she conceded that Obama “probably misspoke?”

Pete Hegseth, meanwhile, wasn’t surprised by how poorly the health care rollout’s been. He asked, “What do you expect when you outsource implementation to, frankly, left-wing organizations, community organizers?”

Qualls insisted to Hannity that the overwhelming majority of Americans can keep their plans, and if the Democrats took Bill Clinton‘s advice, it would “force people to stay in really bad plans that would bankrupt them if they get sick.”

Hannity shot back, “If they want their plan, who are you to tell them to go to a better plan that costs them more money?”