Don Imus On Judas’ Gospel: ‘Indication’ That ‘Jesus May Have Been Gay’ 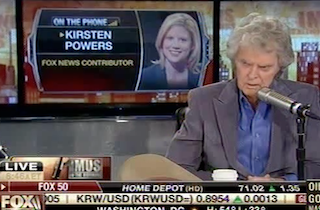 Kirsten Powers phoned in to Don Imus‘ show this morning, and a portion of their wide-ranging discussion was devoted to Laura Ingraham and Bill O’Reilly‘s explosive segment last night, during which they butted heads over O’Reilly’s remark about how gay marriage opponents just “thump the Bible.” Which then led to a chat about some gospels…

Powers said she found herself agreeing with both O’Reilly and Ingraham — because O’Reilly shouldn’t have made the Bible-thumping comment, which is “offensive,” but that he’s correct that they can’t base their entire case on what the Bible says. “That’s just not a way to engage in a public debate,” she asserted. “You need something more than that, especially since our laws are based on the constitution.”

“You know there’s a Gospel of Judas floating around,” Imus interjected.

“There were hundreds of gospels written, only four made it into the book,” he continued. “There was the Gospel of Thomas, Mary had a gospel, they all had a gospel. But Judas — there’s indication there that Jesus may have been gay.”

“Oh, come on!” Powers responded, to which Imus said not to shoot the messenger. “That’s ridiculous,” she added.

“I’m sure it is,” Imus replied. “Like the one about Jesus having a wife…what’s up with that?”

“Yeah, but you know, The Da Vinci Code, who sort of popularized this idea of Jesus having a wife is fiction, right?” Powers stated. “People sort of lose sight of that.”

Take a look, via Fox Business: