The 5 Worst Media Reactions to the Malaysia Airlines Crash

The 5 Worst Media Reactions to the Malaysia Airlines Crash 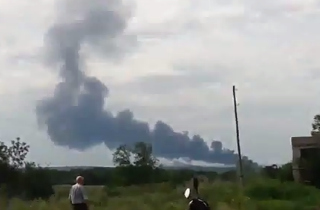 As most news consumers are likely aware, Malaysia Airlines flight 17 went down over Eastern Ukraine on Thursday afternoon. We don’t know much else.

As with most major stories, we will learn more information over the next several days — which requires some patience and discretion.But some people just love to hear themselves talk, even when the wreckage is still smoldering and the news still chaotic and confusing.

From the opportunistic, to the tasteless, to the bizarre, here are some of the worst media reactions to MH17:

1) Fox’s Todd Starnes never misses a chance to attack the president, whom he so clearly loathes:

Obama won't comment on Malaysian jetliner crash until he's had a chance to read tomorrow's paper.

Russia bracing for a severe hash tag from the Obama Administration.

Unless it involves beer or golf – POTUS is not interested.

And he even gave America a dose of his armchair foreign policy analysis:

2) CNN’s Piers Morgan has a theory you need to hear right now:

And if this Malaysia Airlines was shot down, chances of the same having happened to previous one dramatically increased?

This was rich, too:

Problem with all these plane 'experts' is that none of them got anything right re first missing Malaysia Airlines jet.

3) New York Times‘ Nick Confessore tries to be funny about 295 people dying. Surprise — he ends up being tasteless:

Walked past CNN HQ and heard a huge group cheer shaking the Time-Warner Center to its foundations.

At least he admits it:

Yeah, that was a terrible joke, in bad taste. Sorry everyone.

Airliner tragedy in #Ukraine shows US & EU erred by not pushing to keep Ukr. as neutral buffer state, not potential EU/NATO member.

5) Geraldo Geraldos his way through analysis:

Geraldo was the #oneluckyguy on Fox’s Outnumbered this afternoon, and he wasted no time giving wild speculation about the crash, despite the facts being limited.

“As a war correspondent, weighing all the facts as they’ve been coming in — admittedly this is my opinion opinion — I believe Vladimir Putin has the blood of these airline passengers on his hands,” Rivera said.

He then breathlessly said it over and over again.

Just wait a bit before you give your steaming hot take, eh?