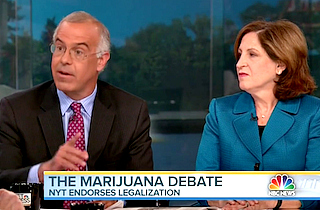 Meet the Press convened a panel this morning to consider the New York Times’ notable editorial calling for the national legalization of marijuana. For reasons far passing understanding, MTP did not invite to that panel a single expert on the subject at hand. Instead the show gathered a gaggle of columnists whose previous ignorance about the subject has been well documented. All this thing needed was Maureen Dowd fear-and-loathering her recent Denver adventure to be perfect.

Anyhoo, these are the people who influence drug policy in this country, and here are the seven most ridiculous things that came out of their mouths:

Never mentioned, not once: the extraordinary harm the War on (Some Classes of People Who Use Some) Drugs has done via mass incarceration alone, one of the major points of the Times editorial. But hey, they had a lot of yuks, those columnists did.