The Best Legislation Ever?: Senate Votes To Lower The Volume On TV Commercials 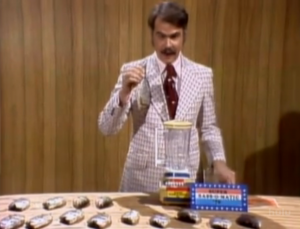 Ok, how many times has this happened to you? You’re sitting back, enjoying your favorite TV show (Celebrity Rehab, obviously) when the commercials come on and, all of a sudden, the volume shoots up to the level your grandparents keep it at. It’s terrible, right? Sure, remotes have made it so we never have to leave the couch during TV time, but that doesn’t mean I want to expend the extra energy reaching for them when I don’t need to! Well, fear not, television viewers of America (AKA everyone in America), because Congress is here to help. Following legislation from the House, the Senate voted unanimously yesterday to make it illegal for commercials to be louder than the TV shows they’re inserted into.

“Ever since television caught on in the 1950s, the Federal Communication Commission has been getting complaints about blaring commercials. But the FCC concluded in 1984 there was no fair way to write regulations controlling the “apparent loudness” of commercials. So it hasn’t been regulating them.

Correcting sound levels is more complicated than using the remote control. The television shows and ads come from a variety of sources, from local businesses to syndicators.

Managing the transition between programs and ads without spoiling the artistic intent of the producers poses technical challenges and may require TV broadcasters to purchase new equipment. To address the issue, an industry organization recently produced guidelines on how to process, measure and transmit audio in a uniform way.

The legislation, sponsored by Sheldon Whitehouse, D-R.I., requires the FCC to adopt those recommendations as regulations within a year and begin enforcing them a year later. Rep. Anna Eshoo, D-Calif., is the driving force behind the legislation in the House.”

Sure, Congress hasn’t been able to work together to get all that much done recently but, you know what? With this new law, I might have to forgive them. Kudos, lawmakers. Now, let me know when the volume is actually lowered. I’ll be watching HBO until then.