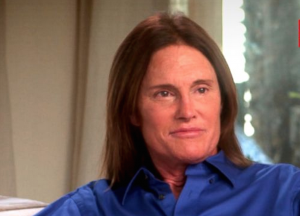 Toward the end of ABC’s fascinating, expertly-crafted Bruce Jenner exclusive interview with Diane Sawyer, the Olympic star and Kardashian patriarch revealed something that arguably dropped more jaws than even his early admission of “I am a woman.”

After Sawyer made note that President Barack Obama said the word “transgender” in his State of the Union this year, Jenner offered mild praise before saying he was “more on the conservative side.”

A shocked Sawyer asked, “Are you a Republican?” Answered Jenner: “Yeah, is that bad thing? I believe in the constitution.”

This comes on the heels of 2016 GOP hopeful and tea party darling Sen. Ted Cruz’s visit to the New York City apartment of two powerful gay businessmen, which has prompted boycotts by some in the gay community.

We’re at a tolerance crossroads, as left and right are about to find out how big each other’s tents are — and the true meaning of diversity.

Jenner is an American hero, a gold medal winner in arguably the most arduous Olympic event. His brief political comments during the ABC interview — citing the constitution in his explanation for his rightward leanings — fit into the playbook of the new Republican. Sawyer, who remains at the top of her game, immediately asked about Mitch McConnell and John Boehner, wondering if Jenner would “ask them to help champion this cause.”

Boehner and McConnell may be powerful inside the beltway, but they’re as authentic as a Taco Bell Gordita Crunch. Instead, the real power inside the party — the true future of the party — lies in the emerging GOP field. There’s Nicki Minaj-listening, TMZ-favorite Marco Rubio; libertarian-first, Howard University-visiting Rand Paul. And the aforementioned Cruz. Will these three, and others in the 2016 field that aren’t of the Huckabee/Santorum variety, recognize the opportunity presented by Jenner and embrace true diversity? The signs so far point to yes.

The ability to accept “others” has escaped growing numbers on the left. After Cruz’s meeting with the gay businessmen (on what primarily amounted to support for Israel), a Facebook page was launched to boycott their establishments, now with 8,000+ fans.

(Of course, boycotts are sort of like hashtag activism — by their very nature, boycotts are an exercise in not doing something. Boycotts are passive, as opposed to the 29,000+ people who stepped up to give money to Memories Pizza last month after that controversy.)

It didn’t matter that one of the men actually held a “Ready for Hillary” event months earlier. No, ‘you’re either only with us, or you’re against us.’ After Chris Hayes of MSNBC argued on Twitter that the vitriol was coming from those who mistakenly thought the businessmen were holding a fundraiser for Cruz, rather than a meet and greet, Glenn Greenwald argued it didn’t matter.

@chrislhayes @SteveKrak @TPCarney I honestly doubt that difference matters much. I think it's more about "congregating with the enemy."

Back to Jenner. The reaction has been illuminating since his public GOP admission Friday night. The Washington Post noted that “only 21% of LGBT Americans” identify as Republican, as if that percentage wouldn’t far exceed the perception put out in the media. The Daily Beast’s Tim Teeman curiously thinks “the party stubbornly refuses to match the changing pace of social attitudes” and wonders if they might “move to reject, or mock, Bruce Jenner’s overtures” — unsurprisingly missing the early public support from conservatives.

We’ll see if it’s the right Jenner will be rejected by, or, if he’s embraced by them, it’s instead the left that does the rejecting. We’ve seen this hollow diversity with those now boycotting the gay businessmen who dared to associate with Ted Cruz. Lena Dunham has displayed this selective tolerance as well.

There are, of course, still those in the Republican party who are anti-LGBT, or who would rather ignore the issues brought to the forefront in the Jenner interview. There is a chance the 2016 GOP field listens to this group and ignores Jenner and the opening he’s created for them — maybe that’s even the easy route.

But diversity is a two-way street. And if Jenner becomes as publicly conservative as he’s about to be publicly transgender, we’ll find out who truly is open-minded.

It’s the GOP’s Bruce Jenner moment, and it’s up to them to either seize the tolerance gold away from the left…or miss the podium.

[This column was originally published at Medium.com]