The Catholic League’s Campaign Against Jon Stewart Has Officially Begun 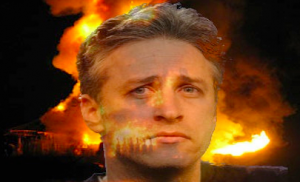 On Wednesday, the Catholic League asked Jon Stewart to apologize for his “vagina manger” segment about the “War on Women.” If not, they promised, they’d mobilize religious groups to boycott. Well, Stewart didn’t apologize last night — and the Catholic League is holding up their end of the bargain.

The statement from League’s president Bill Donohue, via the organization’s website, cites Stewart’s “unprecedented assault on Christian sensibilities” when he “featured a naked woman with her legs spread and a nativity scene ornament placed between her legs; with the picture on the screen, Stewart laughed at what he called the “vagina manger.”

So this is what the Catholic League wants to do — and the sponsors they’ll be in touch with:

Our effort against Stewart includes asking his most consistent sponsors to pull their advertising (if necessary, we are not ruling out a boycott of their products), and a lengthy public relations campaign. The goal? To get him to apologize. If that doesn’t work, we can guarantee that his reputation will never be the same.

Today we will contact Kraft, one of whose products, MiO Energy, was one of the five sponsors that advertised on both the April 17 and April 18 episodes. Moreover, we will contact those on our “Allied Organizations” list (over two days) to join this campaign. They will be asked to contact Steve Albani, Senior VP of Comedy Central Communications, and Kraft.

But that’s not all. The statement also promises they’ll “contact every major Catholic, Protestant, Jewish, Mormon and Muslim leader and organization in the nation” and also get in touch with Viacom (which owns Comedy Central). They will take out ads in newspapers. Donohue is also appearing on Thursday night’s The Young Turks, on Current TV, to discuss the campaign.

“What Jon Stewart did ranks with the most vulgar expression of hate speech ever aired on television,” the statement says. “His incivility cannot go unanswered.”

Their message: “We are not going away.”