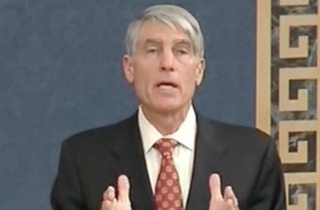 Senator Mark Udall (D- Colorado) will not be serving in Congress this time next month, so he took to the Senate floor this morning for a powerful and lengthy speech revealing more information about CIA torture programs and saying rather bluntly, “The CIA is lying.”

He said the agency “violated our moral and legal obligations in the name of keeping us safe,” and instead of making any attempt to admit mistakes, they’ve “fought to bury the truth” and in doing so repeatedly lied to congressional oversight.

“When asked to describe the critical information in detail which plots were thwarted,” Udall said, “the CIA provided exaggerated versions of plots and misattributed information that was obtained from traditional intelligence collection.”

Udall, who serves on the Senate Intelligence Committee, accused current CIA Director John Brennan of being “openly hostile” towards their investigation and called for him to resign. And not only did Udall reveal some more information about what they learned, but he kept hammering the CIA for trying to keep the public from learning more, calling for the release of multiple reports showing CIA malfeasance and cover-ups.

But Udall was also critical of the Obama administration for not cooperating better with the Senate committee on the report. He ripped the lack of transparency in the White House and even invoked President Obama‘s rather blunt admission of what the CIA did:

“Contrary to the president’s recent statement, we didn’t ‘torture some folks.’ Real actual people engaged in torture. Some of these people are still employed by the CIA and the US government.”

Watch a clip from Udall’s full speech below, via C-SPAN 2: