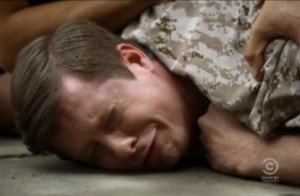 The U.S. Coast Guard is decidedly not happy with a Comedy Central show’s portrayal of a hazing scene involving a dog, an exposed anus, and some Mountain Dew.

Last week’s season five premiere of Workaholics featured one of its characters getting caught up in an intra-military rivalry with Coast Guard recruiters. During one particularly vulgar scene, the Coast Guard recruiters held the lead character (played by Anders Holm) down and poured soda in his exposed rear-end before allowing a small dog to lick it all up.

Naturally, the Coast Guard was unhappy with this scene, TMZ reports. And so the military branch’s chairman of the sexual assault prevention council, judge advocate general, and director of governmental and public affairs fired off an angry letter to Viacom. Important portion below:

While the episode’s storyline about military recruiters may have intended to present a humorous and self-deprecating look at service rivalries, the portrayal of military members lining up to take part in a pornographic film, participating in a vile hazing incident which included both an illegal criminal act of sexual assault and the involvement of a dog, was reprehensible. Sexual assault is a crime. It’s not humorous and it’s not funny. … Your target audience is made up of the same women and men who wear our Nation’s flag on their military uniforms and willingly give their lives to protect our First Amendment rights. And, while you have the right to air these episodes, you also undermine the good your network does by using its platform to educate and expose your audience to critical thinking.

Watch the scene below, via Comedy Central. And below that, read the full letter, as obtained by TMZ.