The Cycle’s Touré And Krystal Ball On The ‘Beer Test’ And The Genius Of George W. Bush 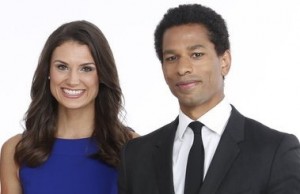 While visiting 30 Rock this week, I had the chance to sit down with the hosts of The Cycle, the commentary fondue pot that replaced Martin Bashir at 3 pm when Bashir moved into Dylan Ratigan‘s vacated time slot. While discussing the state of post-truth politics, co-host Krystal Ball offered that often, the voters get it right with instinctive criteria like the “beer test,” and when I tried to refute that using the words “George W. Bush,”  Touré explained that relating to the common man was part of Bush’s political genius.

We began by discussing the murkiness created by the combination of what seems like unprecedented dishonesty from the Romney presidential campaign, and a fact-checking industry that consistently blows it.

“It’s hard for an individual to parse through what’s true, what’s false, what’s spin,” Krystal Ball said, “when even these supposedly neutral arbiters of truth are getting things wrong.”

Touré added that “When we’re asking voters to listen to the campaigns, and then go out and search to find out what is true and what’s not true, that is not effective campaigning, that is an entirely broken system, and because we’re so tribalist, people are not being penalized for lying.”

“It makes you understand why people favor things like the ‘beer test,'” Krystal said, “because they don’t really know what is truth from the politicians, so they trust what their gut is telling them. And, frankly, human beings are better at making those instinctive judgments of ‘Is this a person I trust,’ than sifting through all the data and the numbers, and coming to an unbiased conclusion.”

She then said that, while the “beer test” is often used to malign voters as uninformed, “I actually am not sure that it’s such a bad way to judge candidates.”

“I think the ‘beer test’ is generally the thing that people vote on,” Touré said. “Politicos get all wrapped up in issues and policy.”

“I don’t think there’s anything wrong,” he continued, “with the majority of voters going ‘Do I trust this person, are they authentic, do I want them in my living room for four years? Do I respect them, do they have a good family, are they a good family person?'”

When faced with the example of George W. Bush, he acknowledges that in that case, “it did not lead to the best presidency we’ve ever seen,” but  points out that the Democrats “put up two barely likable candidates. They were fine family men, but were they men of character” who could “say something and mean it, know who you are, communicate a certain sort of masculinity that resonates with voters? They couldn’t do that.”

“I heard somebody say they’d rather have a flawed message that never changes than constantly changing to try to find the right message,” he continued. “That was George Bush’s genius, and we hated him, and we hated it, but he did have a political genius to him.”

In the face of my skepticism, Touré pointed out that Bush did win two elections (well, really only one) that way, but my initial reaction was to blame the 3% of voters in the middle who got it wrong, voted on the “beer test,” and blew it for the rest of us. That 47% of people that Mitt Romney talks about now was almost the exact number of people who got it right in 2004, in my view.

It’s possible I was too dismissive of their “beer test” theory, though. When I interviewed Rachel Maddow later in the day, she evoked the panic-inducing prospect of a John Edwards vice-presidency, something for which, in 2004, there was no warning beyond voters’ guts. Who’s to say that couldn’t have been as disastrous as a second Bush term?

Here’s that portion of our interview (more to come, including part two of my Rachel Maddow interview):