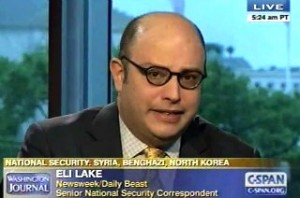 During a discussion of the ongoing civil war in Syria and the likelihood of western intervention in the coming weeks, The Daily Beast’s national security correspondent Eli Lake was confronted by a C-SPAN caller who claimed that any American intervention would be “for the greater glory and good of Israel.” Lake proceeded to creatively and disdainfully dismiss him, but graciously said that he hoped the anti-Israeli caller would “enjoy his basement.”

“[Sens.] Lindsey Graham and John McCain, these are all, pretty much talking heads for the Dick Cheney neocon wing of let’s go to war for the greater glory and good of Israel,” the C-SPAN caller said to Lake. “The United States has no dog in this fight.”

We are broke, if you can remember that. We’ve got people who don’t have jobs who are starving in this country. I want everybody to please call and support the president’s deliberative process. Ask the president to get Congress started on jobs here.

“I don’t want to take this caller seriously,” Lake told C-SPAN anchor Greta Wodele Brawner. “I would like to tell you if you are watching, sir, I regard you as a nonsense person.”

“And the notion that Lindsey Graham and John McCain, who are elected U.S. Senators, are somehow cutouts for the state of Israel as part of a large conspiracy, as a popular fringe theory — enjoy your basement. Enjoy your conspiracies,” Lake continued. “Back here in reality, I will try to cover the world as it is.”

Watch the segment below via C-SPAN: