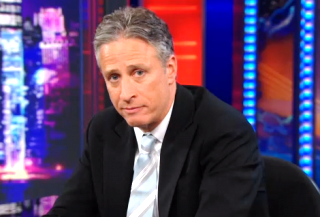 That’s not to say the immensely-talented 50-year-old should leave the entertainment industry. After all, he’s not getting paid $25-$30 million per year for nothing. It just seems that Stewart—fresh off his first directing stint over the summer—is mailing Daily Show after Daily Show in. Repetition now rules the day, as a once-successful formula has become more predictable than an episode of Hannity.

So where is this critique coming from? I once wrote that there’s Bill O’Reilly and Jon Stewart in one stratosphere—in terms of a consistent ability to deliver at a high level—and then there’s everyone else. The numbers back that up. But since Stewart’s return in early September, which wasn’t exactly big news after John Oliver perfectly illustrated that The Daily Show is more about its writers than its host, the show is now simply going through the motions.

That’s not to say that Stewart shouldn’t take Fox or CNN or the GOP to task when they screw up or say or do something insane. Of course not. It’s all fair game…always has been since the show premiered back in 1996.

But what always separated The Daily Show from anything else on television is a willingness to take everyone and anyone to task. To serve as an equal-opportunity offender. To not pick a side. Conservatives reading this are about to (if they haven’t already) go to the comments section to scream that the program has always been a one-way trip down Liberal Lane. And while it’s hard to argue that the show isn’t left-leaning, The Daily Show used to always call out, say, MSNBC, when warranted. No network was safe, thereby making it unpredictable Must-See-TV.

But since Stewart’s return, the show has been singing the same tune night after night. Does Fox or CNN somewhat deserve some of what it’s been getting every night? Of course…being on the air with fresh content 18-19 hours a day is going to lead to controversial and/or stupid statements, oftentimes not ones based in logic (and when the ability to twist or shorten a sound bite to fit a narrative is there for comedic effect, all the better). But if you’re telling me that MSNBC hasn’t had its own share of unintentional comedy recently, you’re either a blind ideolog or haven’t been paying attention.

Ed Schultz blames Fox News for claiming Fox is responsible for the Obamacare “glitches” narrative when the President himself and an MSNBC reporter (unsuccessfully trying to log on to healthcare.gov) acknowledged that glitches existed. Touré makes a huge gaffe in attempting to show where Kenya is on a map, and spectacularly fails. Alec Baldwin attacks Joe Scarborough before his show even launches, only to later delete the tweet (because, you know, nobody will notice that). All of these moments have been widely reported in the media world, but just couldn’t quite pass the Stewart comedy gold standard.

Of course, could you imagine the faux outrage (laced with the usual bleeped f-bombs) if Wolf Blitzer got, say, Syria wrong on a map? How about if Fox claimed that MSNBC was responsible for something it couldn’t possibly be associated with? Or what if George Will—new to Fox—decided to slam Steve Doocy on Twitter? Mr. Stewart would break into Tosh 2.0 just to provide a Special Report.

It’s also interesting that Jon thinks of Fox as a “sh*teating” network and “bullsh*t mountain,” while calling out CNN for “breathless wrongness” and dubbing them “The Lost Channel of Atlanta”. But oddly (OK, intentionally) he can’t seem to find anything wrong lately with the third channel in the cable news race. It’s even more fascinating to see Stewart allow O’Reilly on his program, considering how little he thinks of the network. Stewart likes to portray himself as the conqueror of Fox, but doesn’t exactly let his actions back up the bluster…particularly when the opportunity to expand his brand and score easy ratings via O’Reilly are on the table.

Ultimately, the best move for Stewart in 2015 is to sign with MSNBC if they’re smart enough to pay him whatever he wants. A good portion of their programming is geared toward bashing the competition in Fox and CNN–all while protecting Democrats at all costs–so he’ll obviously feel right at home.

At age 52 in two years, perhaps the comic—who also happens to be the most effective political pundit in cable history—will want to try something different.

Take on a new challenge.

Because 16 years at Comedy Central might finally be enough…

In the meantime, get used to what The Daily Show is serving up on a nightly basis.

When the meal consists of the same course, it doesn’t take long to get used to at all.