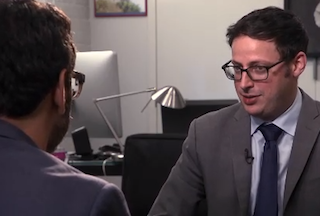 Nate Silver made one of his first major television appearances since leaving The New York Times and moving his Five Thirty Eight site to ESPN last night when he sat down with The Daily Show’s Al Madrigal to reveal which two states he believes will be the last to legalize same-sex marriage.

While Silver believes that Alabama and Mississippi are likely to be the last two states to approve gay marriage, he did not actually go there to assess his assumption. “And you call yourself a statistician,” Madrigal admonished Silver. Madrigal decided to do the due diligence Silver neglected and traveled to each state to see if he could discover which one was more anti-gay.

Madrigal was able to find experts in both places who believe their respective states will be last to legalize gay marriage. But in order to really to the bottom of things, he hired two stunt performers to pretend to be gay and judge the reactions of bystanders. You will have to watch the video below to see exactly how it all played out, but after all was said and done, Madrigal reacted by saying, “Seriously? These are the two gayest states in the union!”

When he was confronted with the findings, Silver hedged, saying, “Even in these states, 30% of people might support gay marriage.” He also admitted that the two states “are kind of butt-to-butt there” on the map.