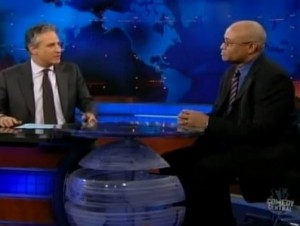 Most people would agree that it takes a lot of balls to celebrate the South’s secession from the Union, while pretending it had nothing to do with slavery, but in fact, it only takes one. South Carolina’s 150th Anniversary Secession Ball heads up the latest movement to sanitize Southern secession of its connection to slavery, and prompted a too-infrequent visit from The Daily Show‘s Senior Black Correspondent, Larry Wilmore. He takes on the notion that acknowledging slavery’s role in secession is driven by “political correctness,” noting that it’s actually “correct correct.”

Countdown’s Keith Olbermann already took a big swing at the subject last week, but Wilmore really hits it out of the park with his trademark cold burn: (from Comedy Central)

McDonnell faced such blistering blowback that he apologized, and later, canceled the event for next year.

The subject also came up during the furor over Nazi re-enactor Rich Iott (R-OH), as Chris Matthews tried to draw a distinction between Iott’s faux Wiking Panzer brigade, the idea being that Confederate pride is somehow more acceptable. I suppose this is something that you kinda have to say to avoid arguments, but in my view, any sense of pride is tertiary to the shame of slavery.

That goes for the North, as well. The popular notion that the Union were “the good guys” is relative, at best. Yes, ending slavery was the right thing to do, but it’s not worthy of much back-patting, especially considering that the North waited to do it until they really didn’t need slaves anymore.

There are many who view acknowledgement of our country’s deeply flawed beginnings as an indication of “hatred” for America, but it is precisely our ability to overcome them (however slowly) that makes America great, and attempts to look away from those flaws threatens that greatness.